A trans woman activist portrayed with a moustache and a bad wig being murdered by a drag queen is the kind of imagery that would come with a trigger warning on most sensible online information outlet, not hailed as “hilarious” by one it’s editors. But, it would appear that Huffington Post editor James Nichols believes that the death of trans activist at the hands of an angry drag queen is a laugh-out-loud situation. 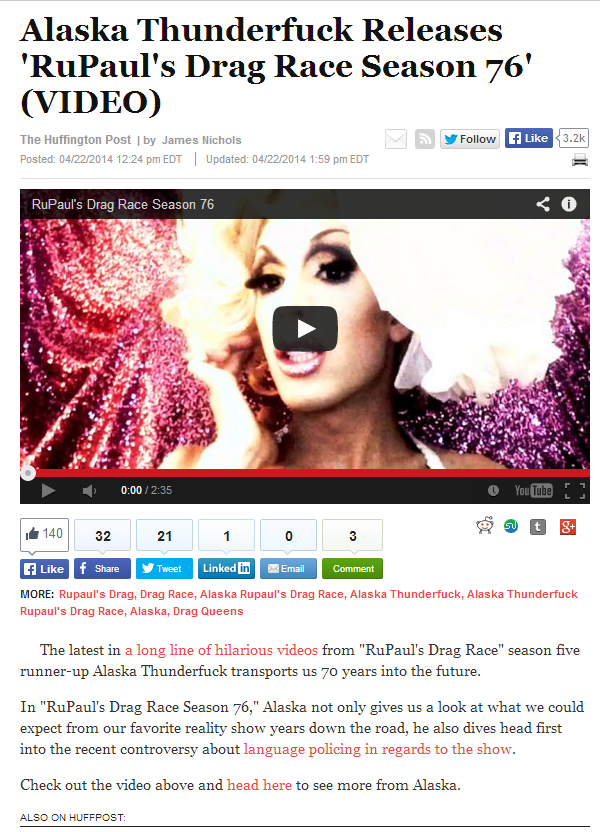 Yesterday, Nichols posted a video to the popular online liberal news magazine’s Gay Voices section entitled “RuPaul’s Drag Race Season 76”- from former Drag Race contestant Alaska Thunderfck- that appears to be a response to the show’s recent decision to end its “You’ve Got She-mail” segment and to pull a previous episode with the segment “Female or Shemale” after extensive criticism from the trans community and a chiding from GLAAD. Alaska’s video depicts a trans activist named “Joy Less” with a full mustache, bad wig, and the deepest voice of any character in the video, who objects to the use of the particular words by the host until she is murdered by the host with the justification of “this is my motherfcking show, and I’m gonna whatever the f*ck I want”. Nichols briefly introduces the video as the “latest in a long line of hilarious videos” from Thunderstruck and gives this description:

“In “RuPaul’s Drag Race Season 76,” Alaska not only gives us a look at what we could expect from our favorite reality show years down the road, he also dives head first into the recent controversy about language policing in regards to the show.”

“But Mari,” you might say, “drag is all about pushing boundaries and satirizing issues.” And, you’d be right; satire and parody have a long history in drag performance. But there can be a fine line between effective parody and bigotry; and Alaska took an Olympic-qualifying long jump over that line in this piece. The physical portrayal of “Joy Less” with mustache, wig, and deep voice doesn’t parody anything; it’s a direct, nasty jab at the legitimacy of the identities of trans women, playing on the same tired, bigoted trope that we’re just a bunch of men in wigs and dresses. Alaska could have made his point about what he clearly sees as the “oversensitivity” of trans activists with functional depiction of a trans woman, but he goes out of his way to be as denigrating as possible for little reason other than to express his own transmisogynistic view, and possibly to insult one or more of the trans writers who were at the forefront of pressing for the language change in Drag Race. Overall, it appears that it’s not even the trans activist’s “oversensitivity” that’s the meant to be laughed at, rather it’s her entire existence. That’s not a parody; that’s a pure, cruel, personal insult tantamount to out-and-out misgendering. Far more disturbing to me, however, is the depiction of the murder of the trans activist character. Though the actual “weapon” appears to be a hairdryer, the use of realistic gunshot sound-effects and cut-back to “Joy Less” with a clear bullet hole in her head turn this into a nightmare of triggers for transwomen, who face some of the highest rates of violent crime. Why does she need to die at all? Why go so far as to show us the character with a bullet-wound in her head?  From the context, it would appear that Alaska intended this particular sequence to be the punchline of the entire skit, which demonstrates a disturbingly callous disregard for the violence faced by trans women. Why is the violent death of a trans woman funny? When murdering a trans woman is portrayed as something one should laugh about, it trivializes our lives, our humanity, and our pain, and that makes it that much easier for the next person to pull the trigger that takes a trans woman’s life.

If this video had just floated across my twitter or facebook feed as a youtube link, I’d still be awfully disgusted. The last thing the ongoing “drag versus trans” dust-up needs is more vitriol on this scale, and the video is tasteless offensive. But, but seeing it posted on the LGBT section of a major online news outlet like Huffington Post takes this to a whole new level and very seriously calls into question HuffPo Gay Voices’ commitment to the trans community. When Parker Molloy, trans issues writer for The Advocate called out Gay Voices executive editor Noah Michelson for the post, he appeared unperturbed:

However, it appears at least someone at Huffington Post was paying attention to the uproar, as later the following statement was appended to the post of the video:

After posting, we realized this video is one example of how diverse gender-variant communities are currently engaged in a complicated conversation about important issues regarding language, identity and privilege. Drag uses humor and parody in ways that are sometimes angry and controversial to make a point, and in this case, we understand that some people are offended by that anger and the way this discussion was broached. We encourage readers to make up their own minds about its message.

So, we’ve got a little bit of a walk-back here and a standard “we understand” statement. What this isn’t, however, is an apology of any kind for describing this transmisogyny as hilarious, nor the addition of any kind of trigger warning that the video contains depictions of trans violence. In fact, it appears to be more of Huffington Post Gay Voice’s ongoing defense of drag performers verbal attacks on trans activists, and of their right to use transphobic slurs at will. Michelson has a history of similar kinds of statements on Twitter, including these doozies that demonstrate his deep lack of knowledge of trans issues:

The fact that an editor of the LGBT section of such a major publication could post such a transphobic video, believing it to be “hilarious,” invokes some serious questions about James Nichols qualifications to be involved in covering trans issues, particularly at an editor level. The fact that his executive editor, Noah Michelson, unflinchingly backed him and that this video still sits on the website without apology, trigger warning, or critical commentary demonstrates that Michelson is a questionable choice to lead Gay Voices at best, and seriously undermines any hope that Huffington Post has a commitment to trans issues and trans readers. Given that their editorial staff consists of only cisgender gay men, I suppose it shouldn’t come as a shock that “Gay Voices” holds true to its name and prioritizes the words of cis gay men.