Trans Rapper Murdered: The Official Story vs. The Friend’s Story

While the official story might not always agree with itself, one thing’s for certain: Evon’s trans status HAD NOTHING TO DO with what happened to him because nobody knew about Evon’s trans status. This line is repeated in just about every story about Evon. Also, officials and media have been very clear about another thing: Evon was a she and she was a woman (and a lady, a daughter, a girl, a female and most certainly not male and not a man).

That’s the official story… and here’s the story as told by Evon’s longtime friend.

Over the course of the last few days, I’ve been able to talk with a friend of Evon and Evon’s brother, Jovan. Considering what just happened to Evon, this friend spoke with me on the condition of anonymity. For the purpose of this article, I’ll refer to Evon’s friend as “James.” Evon used his birth name around James, so James refers to Evon as “Ebony” throughout our interview.

I met him years ago.  The last time I talked to him he said we should go out clubbing together. He and I got along well. I’ve got tattoos, which were an interest of his… so we talked about that often.

He lived completely as a man. He had girlfriends. He had facial hair. I know he used the men’s restrooms.

He and his brother got into playing rap shows and recording music. Jovan got him into it but Ebony really took it seriously. I would talk with Jovan regularly about how to market their music and how to promote their shows. He didn’t seem to push the macho envelope too hard. It seems like his music is mostly about partying. I don’t think he subscribed to much of the thug gangsta image.

Jovan just recently had his first child, which seems to be helping out a lot since his brother’s death.

When Ebony went missing my initial fear was that someone had murdered him after finding out about his gender status. I had a gut instinct that something bad was going to happen to him, considering the crowd that he and his brother had been running with. He didn’t seem to have any connection back to a transgender supportive community so it felt like it was only a matter of time.

Jovan’s friends would go on homophobic rants. [They would tell] Jovan that he would beat up and disown his own children if they [pullquote align=”right”]I believe that the media response was so atrociously slow because a missing black male rapper doesn’t interest the suburban demographic the local news here in Milwaukee tries to cater to. [/pullquote]came out as being gay or transgendered. After a string of ignorant talk about that hypothetical situation, I could tell that Jovan seemed uncomfortable with the conversation. I felt bad that Jovan was having to deal with a close friend being so openly hostile towards something that exists in his family.

I’m passing all of this information along to you because I think it could eventually help people, but I’m definitely hearing things third or fourth hand and I can’t vouch for anything.

Ebony had gone missing on New Year’s Eve. I learned about it around January 3rd. A university student named Nick Wilcox went missing that New Years and his name was all over the news by January 2nd.  The first new report on Ebony was on January 7th. Supposedly, the family had to contact a Chicago news station to get any media attention. They were the ones who finally got the Milwaukee news on the case. There’s some understandable anger in the family that it took so long for the media to cover the story.

I believe that the media response was so atrociously slow because a missing black male rapper doesn’t interest the suburban demographic the local news here in Milwaukee tries to cater to. The missing white UWM student was plastered on the news wall to wall for weeks before Ebony’s news got out. I believe that the transgender issue made the crime more entertaining and that’s why it’s now getting some traction.

I heard Ebony’s roommate knew more about his disappearance than he was telling anyone. I was nervous that his gender status might have been discovered and that something bad had happened.

I heard at some point someone burglarized the apartment that Ebony and his roommate lived in. The roommate had a bunch of musical equipment stolen, but nothing of Ebony’s was missing. Supposedly they attacked Ebony for being responsible for the theft.

The brutality of the murder was out of the ordinary, though.

From what I’ve been told,  they’d originally decided to beat him up for the robbery but when they discovered he was female in the process, it pushed the violence to an extreme level.

The roommate had explained something about Ebony’s disappearance to Jovan, I believe he described what coat Ebony was wearing when he left. The problem was that the family had come to the apartment to retrieve Ebony’s belongings at some point and had the coat that the roommate claimed he was wearing when he left. So, they went back to the apartment when they made that connection and were going to confront the roommate but the police were already there ahead of them. They walked in as a detective was interrogating the roommate, who wouldn’t make eye contact with anyone and was visibly nervous. Once they arrived, some of his story started to change because he had to correct what he’d told the police to what he’d told the family. Simultaneously to this, there was a forensics team working in the basement. They heard the people in the basement ripping out parts of the wall and using blacklights. The roommate was shaking and appeared to be scared while this was happening and at one point had to be told to stay away from the basement.

The family is really wary about outsiders right now. They’re worried that someone is going to try and take advantage of the situation. I don’t believe Ebony was connected to any sort of LGBT community and that makes me uncertain as to how the family would react to being contacted by an LGBT group. Personally, if publicizing this case helps anyone out I’d love it. I think a lot of good could be done by getting this story some more attention. 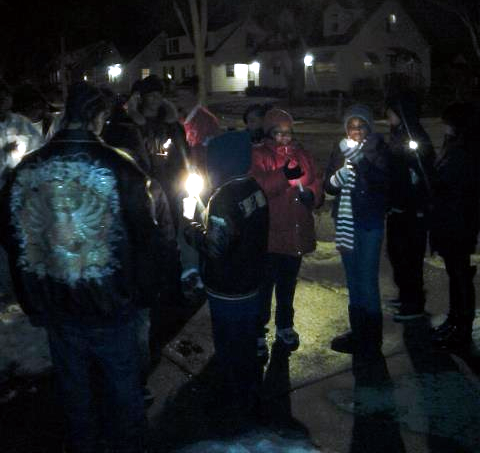 Evon’s last moments were gruesome. He was tied up. A bag was placed over his head and he was beaten. When Evon passed out, he was beaten harder… with blunt instruments. Then, he was shot multiple times. After that, they set him on fire… and then threw him away in a dumpster. After Evon’s murders stripped him of his life, both the media and public officials stripped him of his identity.

UPDATE: Adding insult to injury, authorities failed to recover Evon’s body. This means that his final resting place will forever be the garbage dump Evon’s killers sent him to.  [/alert]

Below are court documents recently filed in the murder case:

Below are the mugshots of the individuals being charged in the death of Evon:

In categories:Best of TA Cristan Williams
Tags:Fact-Checking in the media media
Next Post

On one of the trans Facebook groups I monitor a post was put up about the gruesome murder of transman  Evon 'Yung LT' Young.  One person remarked in the comment thread under the post that's why she never leaves her home,…
Read
Previous Post

Studies show that the trans population lives under extreme psychological pressures unseen in even active military personnel. Fifty-five percent of trans people  were found to live with social anxiety. Within the general American population, similar types of anxiety are experienced by only 6.8%  of the population…
Read
Random Post

Satan In Your Coffee!

(image used with permission of msanborn) Satan Starbucks, or a cup of Jesus Juice! This just in from "The James Hartline Report!" Millions Of Christians Buy Starbucks Coffee Everyday. The Result: Those purchases are funding the Anti-Christian Radicalized Homosexual Movement.
Read
Random Post

From the Gainesville Sun: The CVS Pharmacy manager who allegedly admitted Friday to filming women in his store's bathroom was an active participant in the 2008 charter amendment to "keep men out of women's restrooms." Jonathan Matheny, 27, was charged…
Read
Random Post

Vince Pryor with the Victory Fund joins us to discuss Senator Ben Sasse's (R) latest hand wringing book and the biggest issue effecting us all: the upcoming election. The TA Podcast is an intergenerational show featuring a trans Baby Boomer,…
Read
Random Post

Todays guest blogger is Michelle Diane Rose. Michelle is a communications student and the co-author of The Color of Sunlight. She lives in Portland, Oregon and works for a non-profit. (I dunno why I've taken to using "teh" instead of…
Read