On Saturday, the Toronto Star’s “ethics” journalist, Ken Gallinger, unquestioningly published the incredible claim that an elderly Toronto women was hit on in the YMCA women’s locker room by a male-bodied individual who was walking around the women’s locker room fully nude, replete with erection. 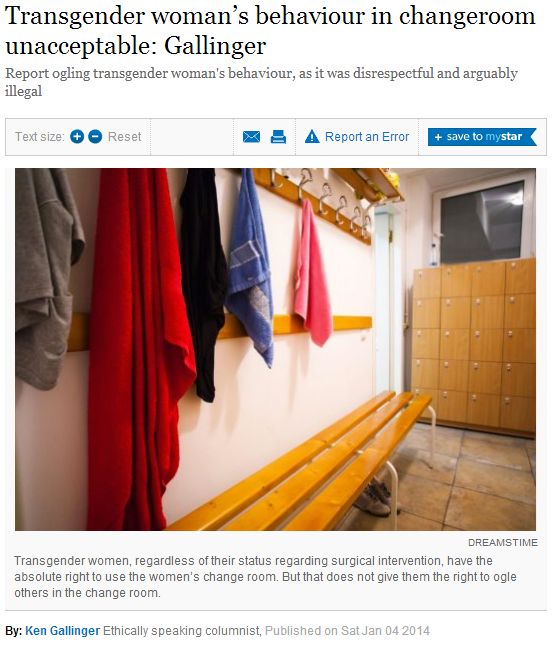 Fact checking is not what we do here at the Toronto Star!

The article claimed that the nude and erect individual was allowed into the women’s locker room because they merely asserted themselves to be trans. When Autumn Sandeen wrote Gallinger about the article, Gallinger claimed no journalistic duty to fact check any claim saying, “It is, of course, not possible for me to substantiate most of the stories I’m told, and frankly I don’t try — my general policy is to deal with issues as they are presented…” To seemingly make the case that he wasn’t entirely derelict in his journalistic duties, Gallinger claimed that he did at least check to make sure “that the e-mail address from which it came was valid.” What Gallinger utterly failed to do, was pick up the phone and simply call the YMCA to verify any aspect of this anonymous story.

A valid, yet anonymous internet account claimed to be an elderly woman who was approached by a fully nude male-bodied individual who had been strutting around the women’s locker room with a full erection. Apparently none of the other women in the locker room complained or called the police. We are invited to accept the ridiculous narrative that this behavior is permissible because Toronto has a trans equality law.

Since Gallinger wasn’t willing to fact check any of these claims, I contacted every Toronto YMCA with a pool and guess what?

You can hear the YMCA counter – time and again – the plausibility of the claim propagated by the Toronto Star in the following TransAdvocate podcast:

YMCA: Good morning. Thanks for calling the YMCA. This is Jessie speaking. How may I help you?

Cristan: [Explains situation] I’m calling to find out if you know if in fact that happened. Has there been any complaints – have you heard of anything like that happening?

Y: I haven’t heard a complaint. Um, if you would like, I can ask my manager…

Y: Yes, I have Patrice, my manager, on the line and she’ll help you out.

C: Good morning. Did he explain the situation?

Y: He gave me a brief overview. You’re calling about an article that’s a little disturbing that you’ve seen online.

C: Right [explains situation]. I was calling to find out if you had heard of any complaints to the YMCA of that type.

Y: No. I certainly haven’t.

Cristan: My name’s Cristan and I’m calling because [explains situation]. I wanted call the YMCA and just ask… Have you had any complaints of men claiming to be women, going into the women’s locker room with erections and hitting on elderly women?

YMCA: I have never heard of anything like that!

C: [Laughs] I didn’t think so, but I thought I would check.

C: Yes! Okay, thank you. So just to be clear, nothing like that has happened there?

Cristan:  [explains situation] I was calling to verify some of the claims made in the paper.

YMCA: Okay. We’ll see what we can verify.

C: [Explains situation again] Did you have any complaints of a male-bodied individual, in the women’s changing area, with an erection and hitting on elderly women?

Y: No! To be honest with you, I’ve never heard of anything like that! So, I’m so surprised! It was in the Toronto Star?

Y: Okay, so sorry about that! I have no idea about that. I’m sure I would have heard about it.

C: My guess is that someone just sent [the journalist] a prank email and they took it on face value and didn’t fact check or anything – didn’t contact the Y – and printed it because it’s such a sensationalistic story.

YMCA: Yeah, I read the article and I read your email.

Cristan: Was there any situation like that that you know of? Was there any complaint of a man, going into the women’s changing area, stripping nude, having an erection and then hitting on elderly individuals?

Y: Nobody has reported to us anything like that.

C: That’s what I was thinking. That story just sounded so extraordinary and coupled with the fact that it had no corroborating evidence at all, and that they had not bothered to contact the Y…

Y: Uh, I would be very, very – yeah,  there are several things there that I, uh… Yeah, hardly believe.

C:  [Laughs] Right. Okay. SO, I’ve contacted a couple of the YMCAs in that area and everyone is saying the same thing, that no one has heard of anything like this and that the very notion that there would be a nude male in the middle of a women’s changing area, standing there with a, uh… you know, aroused, talking to women – that no one would complain about that. I just doesn’t sound right to me. At all.

Y: Yeah, it sounds very… Yeah. I manage two centers and I have not heard of anything about that. In my career, by the way.

By Cristan Williams @cristanwilliams In its landmark 2009 decision on responsible communication in the public interest, Canada’s highest court asserts this principle: “Freedom does not negate responsibility. It is vital that the media act responsibly in reporting facts on matters…
Read
Previous Post

[UPDATED] Trigger Warning! Focus on the Family is coming to a theater near you!

A friend and I recently went to see the new Hobbit movie. The lights dimmed and imagine my surprise when the following movie preview flashed across the screen: My friend and I both gasped at the same time. This was…
Read
Random Post

Science and Ideology: The Blanchard-Bailey-Lawrence Model of Transsexuality

By Élise Hendrick (reprinted with permission) Autogynaephiles, Homosexuals, and Fabricators: The Blanchard-Bailey-Lawrence Taxonomy of Trans Women I. A Hypothetical Let us suppose that someone claimed to have found that rape is primarily a function of the sexuality and presentation of…
Read
Random Post

It’s really interesting to see how mainstream cable newsmedia is lauding the Democratically-controlled 111th Congress for getting so much done. It’s not entirely undeserved of course, but when one takes a close look at what actually did get done this…
Read
Random Post

Why Am I Doing This?

So when I was offered a blog spot I was excited but at the same time I was scared. I love to write and I'm pompous enough to believe that others give a shit about what I have to say.…
Read
Random Post

Liberal MP Dr.Hedy Fry and NDP MP Randall Peterson just introduced Bills C-276 and C-279 a few days ago in the Conservative majority dominated Parliament. Why did they do so?   Because it's clear that the Great White North and…
Read