An excerpt from his testimony:

This bill would call for any student and young adult who perceives themselves to be something other than their sex at birth to share shower facilities, restrooms, locker rooms with gender or sex they feel they are at any given time.

The problem is that this bill, or current law for that matter, affords a clear definition as to what constitutes legitimate gender identity and gender expression. The bill opens up Pandora’s box, in effect, that creates a slippery slope that allows anyone to claim they are something sexually and then have full access to the opposite sex facilities without regard to privacy.

We feel this is an absurd and offensive policy that would not bode well with the majority of students.

The TVC didn’t just limit their speaking out against AB 1266 to their testimony before the Senate Education Committee. Louis Sheldon, the founder of TVC, spoke of the bill in TVC’s online statement TVC Condemns Gov. Brown’s Signing of Transgender Bathroom & Shower Bill for California Schools.

The absurd and unthinkable will become reality thanks to Governor Jerry Brown signing the transgender and cross-dressing bathroom and shower bill into law [August 12th, 2013].

We know time and again the fluidity of those who decide to change their sex and then change it back. Gender identity I the admission of its own proponents changes frequently, even day by day, with interests that fluctuate depending on time and circumstance. Their DNA is far more consistent, and individuals will always be male or female.

Instead, the State of California will now encourage youth as young as 5 years old to question their sex and gender. The lines will be forever blurred now that any youth can use any bathroom or locker room or play on any team they feel like. You can theoretically have an all-girls softball team made up of biological boys. This bill is absurd and mere lunacy. There was no public demand for this bill. Brown has cemented the adage that ‘California is the land of fruits and nuts.’

Even the “fruits and nuts” comment by Sheldon is stated in a more reasoned language the TVC has used in the past. The current executive director of the TVC, Andrea Lafferty, has used the pejorative “she-male” on multiple occasions in past years.

One example of the use of the pejorative can be found in a TVC piece on the Employment Non-Discrimination Act in the 110th Congress (2007-2008):

During the hearing, every pro-ENDA panelist carefully avoided mentioning the fact that protecting “gender identity” in the law will force businesses and non-profits to cater to the whims of cross-dressers, transsexuals, drag queens, and she-males.

Andrea Lafferty again on the same subject in another TVC post:

And, on the issue of ‘gender identity,’ one doesn’t have to be a psychiatrist or psychologist to clearly understand that if a person rejects his birth sex, he is experiencing disordered thinking. Even Members of Congress should be able to understand this simple truth. Disordered thinking is treatable. It should not be granted minority status under federal law.

…If Americans saw what these gender confused individuals looked like – and what impact they will have on business practices, they’d be outraged,” said Lafferty. “Imagine being forced to hire or retain a person who goes through half of a so-called sex change operation? Should a business really have to deal with she-male demands? Or, to hire or retain a person who just “thinks” he’s the opposite sex, but doesn’t “transition” into another sex. The legal problems for employers will be insurmountable. 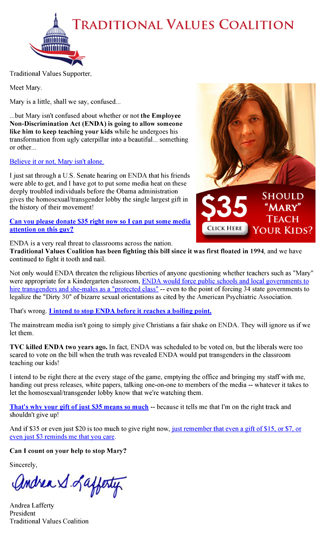 Andrea Lafferty again referring to transgender people by the pejorative in arguing against Montgomery County, MD transgender non-discrimination law from 2011:

[Sen.] Leventhal has just confirmed for us what we’ve been saying for years about the federal Employment Non-Discrimination Act and transgender sexual confusion. Maryland officials are considering and Congress has considered passing legislation that will force innocent girls into dealing with she-males, cross-dressers and transvestites in their shower stalls and locker rooms. Why should Montgomery County or the U.S. Congress be forcing Americans to cater to the whims of men and women who are mentally ill? Why does a man who thinks he’s a woman deserve special protections to use girl’s restrooms and locker rooms? Have our legislators lost their minds? It seems so.

In June of 2012, the TVC moved away from using the images of drag queens to portray trans women in arguing against ENDA, but instead moved to using more “tragic transsexual” imagery. But Andrea Lafferty still referred to trans women by that offensive, antitrans pejorative in the fundraising email “Mary Needs Help.”

Not only would ENDA threaten the religious liberties of anyone questioning whether teachers such as “Mary” were appropriate for a Kindergarten classroom, ENDA would force public schools and local governments to hire transgenders and she-males as a “protected class” — even to the point of forcing 34 state governments to legalize the “Dirty 30” of bizarre sexual orientations as cited by the American Psychiatric Association.

The TVC’s representative didn’t refer to trans female teenagers attending public high schools as “she-males” in their testimony before the California Senate Education Committee, but it’s a pretty safe bet that the organization’s executive director thinks of those trans youth in the context of that pejorative.

The TVC has an executive director that refers to trans women by a pejorative at least as offensive as the anti-woman c-word and the anti-gay f-word, and she authorized her representative to speak to the California State Senate Education Committee. One can dress bigots in suits and put them before legislative bodies — using polite language in polite company — but it doesn’t change the fact that they’re bigots.

So how seriously should we take bigots?

Seriously enough to worry that a signature drive to put a referendum to repeal AB 1266 may succeed.