Cathy Brennan, contributor to the Radfem2013 conference, has sunk to yet a new low.  She is now trying to exploit the death of our sisters (Transgender Day of Remembrance – TDOR)  to further her justification of transphobia. She wants us all to believe that it isn’t transphobia that kills us, it is male violence. While it is true that the majority of murderers are male, transphobia is the cause of the high death rate. I think we all know that TERFs are not likely to gun us down but their agenda that is filled with hate for transgender folks, mostly trans women, helps perpetuate violence against us. Transphobia is not okay and it really does kill. – The TERFS

Social violence begins with social oppression. The trans population is routinely denied employment, social services and medical care. Cathy Brennan, co-organizer of the Radfem2013 conference (which was booted by the conference venue* for being an anti-trans hate group for the second year in a row) is better known to the trans community for her lead-role in attempting to have UN trans protections revoked. The fact that the TERF “TDOR” site admin is the selfsame UN anti-trans activist (who actively opposes trans  other equality legislation too, BTW) makes her appropriation of trans murder all the more deplorable. Gwendolyn Ann Smith, the creator of the the first Trans Day of Remembrance site, has requested that the TERF leader cease using her content, but Brennan has refused.

The real Trans Day of Remembrance gives trans people a chance to honor the memory of those whose lives were cut short through anti-trans violence. Remembrance affords members of the trans community an opportunity to publicly acknowledge our humanity, our loss and our strength as a community. The TERF DOR site attempts to use the death of trans people to promote the TERF belief that it is not the confluence of cis-privilege and transphobia which leads to the slaughter of trans people, but rather something they call “male violence” – that is, the belief that men are inherently violent by virtue of their maleness. Paradoxically, TERFs believe, assert and promote that transwomen are men. 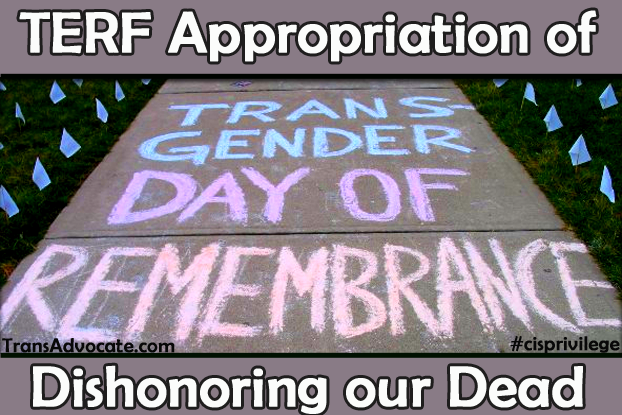 *According to the Executive Director of the RadFem2013 CONFERENCE VENUE, they got the boot for anti-trans hate:

“While our commercial bookings subcontractor [an events firm called Off to Work] has a certain amount of freedom to use the centre when we are not using it for cultural events, if it comes to the charity’s attention that an event goes against our policy, then we will point it out to them.”

“We did some research into RadFem and discovered certain language was used and some statements were made about transgender people that would go against our equalities and diversity policy.

“We have discussed with our subcontractor Off to Work how to avoid such confusion in future and have strengthened our internal communications as a result.” – [NEWS SOURCE 1] [NEWS SOURCE 2] [ORIGINAL: “Radical Feminists Barred From London Irish Venue”]

TERF organizers of RadFem2013 are now asserting that they were not ejected from their venue for anti-trans hate by citing a scripted post made by the TERF’s BOOKING AGENT (which rents an office at the original RadFem2013 location). Obviously the RadFem2013 client (ie, the booking agent) and the actual venue itself have diverging views of TERF rhetoric and behavior. The bottom line is that RadFem2013 – just like RadFem2012 – was booted by their venu because the venue felt that the group’s rhetoric constituted anti-trans hate. 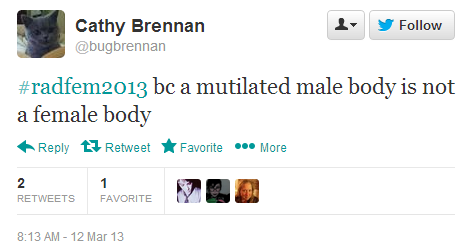 Another TAer asks, Why do TERFs get special dispensation from the Southern Poverty Law Center?