The Wesboro Baptist Church. It’s been a nuisance to the LGBT community since 1991 when it took its first steps to publicly advocate against gay people. We’ve all heard of them. They were a cause for many a family members loss if appetite at the dinner table when their “God Hates Fags” slogans were posted in family rooms across this nation, and the world. Yes, they were certainly a nuisance. But, that nuisance had a benefit in the grand scheme of things. Those who were sitting on the fence wondering if it was really an acceptable thing to believe, or promote the idea that “God really does hate so called fags” got an in your face example of why that mindset is so wrong. 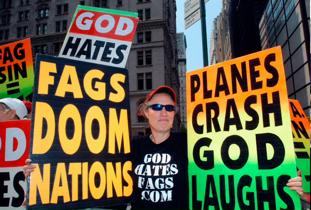 They clicked away on the internet and saw hundreds of families and children hurt by the hateful practices of Westboro. Practices that hatefully attacked a minority group on bogus claims of damage to society, and unwarranted villainization based in zero evidence. The more Wesboro screamed, the more people were turned off to their perspective. Unfortunately for Westboro, they didn’t understand or did not care that their ideology and practices were digging themselves into a deeper and deeper political hole every time they opened their mouths, or grabbed a picket sign. That is because for some reason, the members of the Westboro church’s minds became warped. One could debate the intricacies of why their congregation was so twisted. But, the vast majority of Americans do tend to realize that they were off their rockers.

In the end. Westboro was so blinded by what they thought was the truth, they ended up helping those they attacked. Whatever mental issues that caused them to act out in the first place, kept them locked, loaded and firing on the innocent. They would continue, and still do continue to do this regardless of media amplifying their voice. We all know that this is because they are insane, and they are principled in their insanity. So, the hate that spews out of Westboro will never stop until their members dwindle, or die off.

Funny thing is, that if one really thinks about it, Westborough had a lot of influence for only having a handful of members. They were not a mega church or a congregation with high numbers. They were mostly family members and a few people from around where they lived that caused all of that ruckus and got media attention. They were no real threat to the LGBT movement as a whole. The media could have simply ignored them and it’s possible not much would have changed for the better to the degree that it did. But, I propose that ignoring them would have changed things for the worse. Where would the uptick in the LGBT communities rights – specifically gay marriage rights be today without all of those hurtful photos, videos, and slogans from Westboro that we were able to dish out to family members, friends, and coworkers and say, “This! You see this! This is horribly wrong!”. Those handful of people at Westboro were ignorant human lightning rods for self-degradation of their perspective, and tools for LGBT emancipation from bigotry in the minds of some.

They are not the only hate group that can be used as a tool in this way. 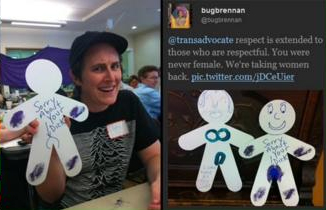 Transgender Exclusionary Radical Feminist (TERFS) are another. And much like the Westboro Baptist Church had their insane leader Fred Phelps, the TERFs have a woman by the name Cathy Brennan they tend to cling to in leadership. She’s just as hurtful and misguided to a specific minority group. And much like Phelps and his minuscule congregation, she and her followers will never rest in their quest to hurt others. I see this as an excellent opportunity to bring forth to the masses the ignorance, not so subtle bigotry, and call for segregation of the minority of trans women from other women in public spaces across the board.

The TERFs perspective is that transgender women are not really women. They believe that transgender women are really men masquerading as women in order to keep women down, and do malicious things in private settings such as rape. TERFs believe that as Cathy Brennan states “The goal of “trans” whacktivists is to ERASE “woman” from reality”. Which of course is insanely conspiratorial, and will in no way stand as valid in the court of public opinion long term. But, because of their Wesboro like insanity they actually believe that this is a fact, or at least believe that others will believe this nonsense outside of their small group. They don’t realize that the counter to this ridiculous belief is quite simple, rational, and true. It goes like this:

Who in the hell would go through years of hormone replacement therapy, electrolysis, doctor’s appointments, psychological therapy, loss of thousands and thousands of dollars, loss of family and friends, possible loss of one’s job, put themselves in harm’s way by being a prime target for physical violence at the hands of men? And most importantly, why would some so called “men” elect to have an operation on their genitals that would remove their ability to use their sexual organ in penetrating fashion in the act of rape? Most rational adults are not ignoramuses to the degree that they would believe such rhetoric especially after hearing the counter argument.

Time and time again those findings are verified as correct and true.

So, on the one hand we have a handful of conspiratorial individuals who have zero evidence that transgender women are actively seeking physical transition and access to spaces with nefarious intentions. They do verbalize the idea as Cathy Brennan puts states, “These insane MALES are trying to erase us, women. They are actively working night and day to ERASE us from our shared language, from our laws, from the face of the earth“. And on the other hand, we have tons of evidence that is consistently growing which repeatedly shows that transgender women are who they say they are. That we have the unfortunate disposition of having the birth condition of being born neurologically women with male genitalia. A disposition of physical condition ( whether one believes it to be a brain condition or body condition — take your pick. ) which puts transgender women in a horrible social and mental health position. A horrible mental health position that is benign in the way of rape and physical abuse to those around the trans woman enduring it, and society as a whole. Transgender women are women in their brains regardless of how they speak, talk, look, what genitalia they have on their pants, or how they outwardly express themselves under the duress of a strict society. And medical professionals in the know understand that. Sure, there may be a wacky doctor in the fringe who may disagree with the vast majority of the medical community that TERFs may try to convince to say an uneducated statement. However, much like how the medical community countered the few fringe doctors that a few backwards uneducated and sensationalized MMA media outlets could scrounge up – a move that made those outlets and doctors look incredibly silly in the end – they are easily countered by the overwhelming majority of the medical community.

The TERFs cannot win this fight. They may have been able to that from the 1960’s to 2000’s. They may be able to peel off a few hate filled feminist who have been wronged by men, and who’s delusions beckon them to aim their arrows at what they think is a ‘man coming to get them’. But, this is 2014. And there’s enough information out there, and enough dedicated intelligent transgender women and allies who are ready and willing to bring to light, and then stamp out the TERFs misguided and self-destructive attacks. Those who politically battle the TERFs have the power of the internet, the intelligence and expertise to use it, the numbers to implement it effectively, and most importantly — the dedication and fire that comes from being pushed to action by what TERFs say.

There’s also the fact that most media entities would not and don’t take TERF’s seriously and promote them in a positive manor. Think about it. With all of the media attention on transgender people within the last year, with all of the information on the web about our struggle lately. What well known media entity would take up the cross of promoting TERFs as individuals who have valid arguments? What media entity would positively promote a hate group that says things as reported on dyssonance.com and on theterfs.com. Or, support the despicable actions of TERFs where they publicly out transgender women as pointed out by genderidentitywatch.net. What media entity will stand by them when they intentionally do this to a minority group that already has a problem with violence against its individuals because of the hate in the minds of people like Cathy Brennan and the TERFs?

Perhaps FOX news would do such a thing? Which would both do wonders for the dissemination that TERFs exist, and knocking FOX news down a peg. Because as seen in the YouTube video Kid Dismantles Fox News’ Fear-Mongering Over Gender-Neutral Restrooms, FOX new’s antiquated hard right wing stance on LGBT issues is slipping. Even amongst some of it’s more hard core base of users. Besides, I believe their media competition is smarter than them, and would counter with correct information. I actually wish that would happen. I actually wish that a right leaning media entity would take the bait, and run with the TERF hate group. Because we could have a field day with the compiled information on TERF activities throughout the years. But, that’s not likely. I can dream though can’t I?

I propose we take what we know about the TERFs and amplify that information as much as we can. Let’s let the world know who and what they are. So that when people encounter them like they do Westboro baptist church members, they are reminded just how horrible transphobia is. And are reminded not to let it seep into their hearts and minds. And instead of sitting at home twiddling our thumbs waiting for people to engage in a topic that is far from their minds, we can bring it up to them. Visibility. It is essential to the forward inertia of transgender rights. Let’s take the vitriol, and spirit of the TERFs and blast it to the world so that individuals in this world can easily recognize transphobia when they see it. Whether it be in others, or in themselves.

Writers for the TransAdvocate work hard to bring you news and commentary. If you found this article meaningful, let the author know that you appreciate the work they do with a tip!
In categories:Fallon Fox Opinion
Tags:Fallon Fox TERF TERFs westboro baptist church
Next Post

In her latest cognitive-dissonance-filled diatribe, "comedian" Andrea James attempts to maintain her waning relevance by criticizing the GLAAD Board of Directors for having too much trans representation. The piece, published on Queerty (a blog with its own problematic racist and…
Read
Previous Post

Hair does not make the woman, Sarah Ditum

Sex, Gender, and Sexuality: The TransAdvocate interviews Catharine A. MacKinnon

This Says It Better Than I Ever Could

From Alas, a blog Amp has been personally attacked many times because of this cartoon. I believe it's because it's speaking truth. Some folks don't like to see their own reflection, or refuse to believe it and react violently when…
Read
Random Post

The Tribeca Film festival has announced it's 2010 lineup of films and "Ticked-Off Trannies With Knives" is among them. "When a group of transgender women are violently beaten and left for dead, the violated vixens turn deadly divas in this…
Read