There’s no love lost between me and Queertyas many of you longtime readers are aware of.  I’ve written more than a few times about the failures Queerty regularly gets into when it comes to race and trans people.It seems this rainbow themed site never fails to take the low road when it concerns the way transpeople are covered, the transphobia that is unleashed in its comment threads, the racism it sinks to or with gleefully wallowing in white gay male vanillacentric privilege .

But this was the latest classless move by this site that was revived from the dead in 2011 when it disrespectfully penned the headline in its take on the Daily Mail story about Evie, President Obama’s Indonesian trans nanny.

How apoplectic would you be if a trans themed publication aimed a word you consider a slur to your community at you and your readership?  Umm, never mind, we already know the answer to that question. 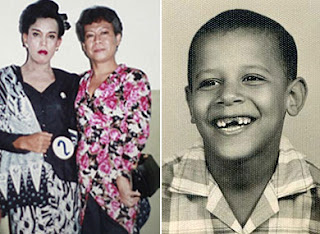 Queerty and other stops in the Gayosphere, this transphobia in gay circles is really getting old.

This time you got a two-fer in terms of letting your transphobia and racism shine through in your headline aimed at Evie.

As Evie’s story points out, transpeople are part of the diverse mosaic of human life and we are intertwined with it to the point in which we not only make history, a transperson was the nanny for the future president of the United States.

Evie’s story also reminds us of where we don’t want to go in the international trans community of being unhappily forced to perform and live a gender role we don’t feel comfortable with.

The discrimination and transphobia aimed at my Indonesian transsisters is no joke, and only someone wallowing in vanillacentric privilege would see it that way.

You Queerty peeps and your like minded acolytes may think being trans is a joke or we don’t belong in ‘your GL community’,  but if you define your community as having the same whiteness and vanillacentric ‘special right’ to other, discriminate and harass people as cis straight people do without being called on it, that’s a community I don’t want to be a part of.

cross-posted from Transgriot
In categories:Best of TA Monica Roberts
Next Post

Dear Dr. Zucker, We Are Not an Experiment

After finally hearing Dr. Zucker’s comments on the CBC Radio show I participated in that aired this past Monday, I had to sit and reflect. Dr. Zucker referred to us (parents of gender diverse children and the children themselves) as…
Read
Previous Post

This guest Transadvocate post comes from Natalie Reed. Reed describes herself as "a magical young woman who lives in the mists and pines of Vancouver, British Columbia, where she fends off the oppressive gloom and darkness basking in the warm…
Read
Random Post

The TransAdvocate is pleased to announce the launch of a new program aimed at making a decades-old intersectional trans, intersex and genderqueer inclusive radical feminism more accessible. The TransAdvocate, in partnership with the Transgender Archive, launched The Conversations Project on…
Read
Random Post

PodCast: Reviewing media bias and an interview on Swirl Radio

In this podcast, I review the way in which the mainstream media has responded to the TWO right-wing hoaxes which spread the trans bathroom meme in mainstream media. Also, there's a short interview I did for Swirl Radio - a…
Read
Random Post

Sheila Jeffreys and the myth of where trans care comes from

Sheila Jeffreys has for years claimed that trans surgery is the product of some malevolent conspiracy: could be likened to political psychiatry in the Soviet Union. I suggest that transsexualism should best be seen in this light, as directly political,…
Read
Random Post