I recently posted the following to my FaceBook page:

Is it me or is there a lot of “JESUS! STFU already! I’m complementing you and think you should have rights! What, now I have to stop asking about your genitals TOO?!? Are you never happy?!?” going around.

I saw this sentiment in the fallout over Katie Couric’s focus on the genitals of Laverne Cox and Carmen Carrera in her interview. I again saw this sentiment expressed after the Janet Mock interview on Piers Morgan’s show. Morgan felt both attacked and victimized because he was called out for insisting upon using his preferred language to describe Janette Mock’s experience. Some trans allies felt that the trans community should chill; trans people should expect that professional journalists who work with the trans population won’t know how engage trans people in a respectful way.

Recently the TransAdvocate FaceBook page erupted when I posted the following image: 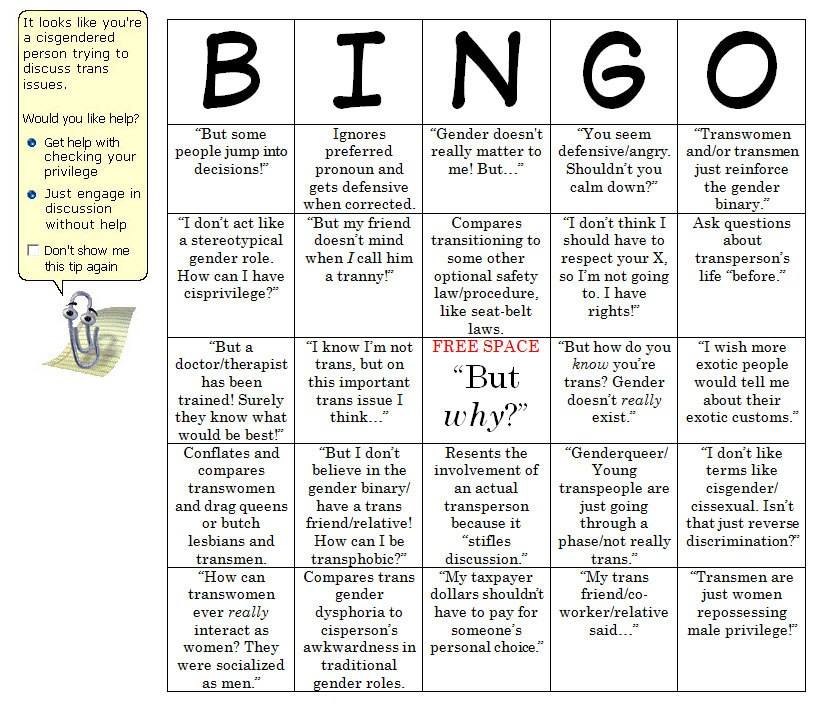 Here’s how some cis allies responded to the above image:

This a page for people to advocate for the trans community. I am a straight female who is curious about these decisions and this post makes me feel wrong for asking questions.

Why would it be a cispriv thing to ask about their life “before? “

You can only be accepted if you WANT to be accepted. You don’t, so fuck off and die

I then received an indignant message from a cis person:

I posted the above image to TransAdvocate social media as an example of what cisprivilege looked like. Some cis people were able to spot the issue being addressed right away:

I’m certain that the [cis] writer is being honest and that their feelings are valid. I am also certain that the writer is exercising cis privilege. In 99.9999% of the world trans people’s feelings of discomfort and exclusion are routinely pushed aside in support of making cis people comfortable. As cis people we don’t have to notice this practice (that’s the nature of privilege, it ‘s the ability to NOT have to think about a thing). This page is part of the 0.0001% of the world where the comfort of cis people is not preeminent. As cis people, we’re trained to assume that our comfort and education is the default priority, and it’s those feelings of discomfort (very real and valid feelings) that are being expressed here. This is an example of privilege because it is predicated on the assumption that trans space should be constructed to help educate and make cis people comfortable.

Others pulled a Morgan:

The issue all of the above posts and events touch on are various degrees of cisprivilege. Before it was internet-cool to talk about things like privilege, back in 2008 Calpernia Addams made a pithy (and totally badass) video for trans folks who were overly-fatigued with cis people who expected that trans people would accommodate their rude behavior: 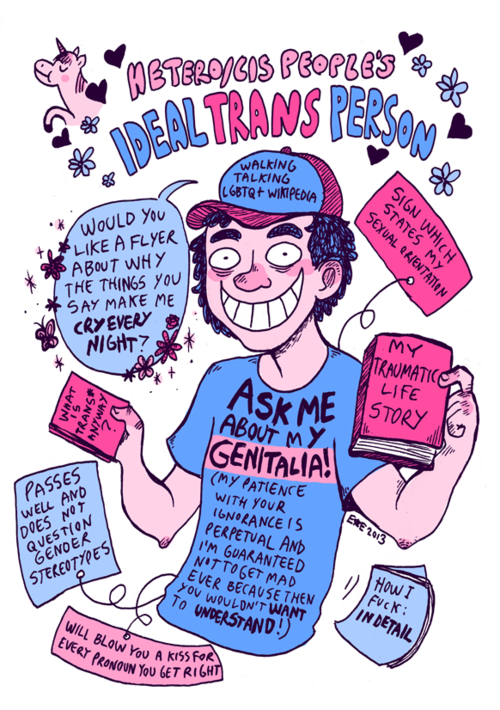 So what’s pissing off so many trans people?  Here’s the deal, when a non-trans person uses a trans person or space to:

… folks are gonna have a bad time. At its core, these 3 behaviors are issues of consent; each behavior uses – without explicit permission – a person or community.  To again quote the cis person who got it, “This is an example of privilege because it is predicated on the assumption that trans space should be constructed to help educate and make cis people comfortable.”

Is it reasonable to expect that people will know not to ask about another’s genitals upon meeting them? Is it reasonable to expect that you won’t be objectified as an object of curiosity? Is anger an appropriate emotional response when someone crosses these universal boundaries? What does it mean to move through life knowing that you can’t reasonably hold those expectations? Is that what empowerment looks like?

If someone wants to talk to you about deeply personal issues, is your honest consent important? Is it reasonable to expect that professional journalists will read the GLAAD Media Guide prior to conducting an interview with a trans person?

Avoid pronoun confusion when examining the stories and backgrounds of transgender people prior to their transition. It is usually best to report on transgender people’s stories from the present day instead of narrating them from some point or multiple points in the past, thus avoiding confusion and potentially disrespectful use of incorrect pronouns.

Referring to a sex change operation, or using terms such as pre- or post-operative, inaccurately suggests that one must have surgery in order to transition. Avoid overemphasizing surgery when discussing transgender people or the process of transition.

These are serious questions and the way the trans and cis communities choose to answer will – in significant ways – define the quality of life for generations of trans people to come.