I look to Sylvia Rivera, who passed in 2002, was an activist icon whose action approach to civil rights is one I admire. I like to think I’ve emulated part of her action approach to civil rights when I chained myself to the White House fence twice for repeal of Don’t Ask, Don’t Tell, but I don’t think I’ve come close to measuring up to her example.

But, she used terminology that was appropriate in her day for trans people that now would be considered dehumanizing.

For example, she referred to 24/7 transitioners, no matter what their sexual orientation, as gay. She called herself a drag queen, a queen, a half-sister, and a transvestite who fought for the civil rights of gays. Later, she referred to herself as trans and transgender, then said moved to hating the labels. Her terms for herself changed over her life: she changed and grew, and so did her terminology for herself and her community. I believe in has a lot of relevance to the online conversation around the terms tranny and shemale.

References for how she referred to herself and community? Her 1973 speech to Christopher Street Pride in New York provides an example of her use of gay as a term that included drag queens and trans people.

I’ve been trying to get up here all day, for your gay brothers and your gay sisters in jail! They’re writing me every motherfuckin’ week and ask for your help, and you all don’t do a god damn thing for them. Have you ever been beaten up and raped in jail? Now think about it. They’ve been beaten up and raped, after they had to spend much of their money in jail to get their self home and try to get their sex change. The women have tried to fight for their sex changes, or to become women of the women’s liberation. And they write STAR, not the women’s group. They do not write women. They do not write men. They write STAR, because we’re trying to do something for them. I have been to jail. I have been raped and beaten many times, by men, heterosexual men that do not belong in the homosexual shelter. But do you do anything for them? No!

A number of Rivera’s essays, speeches, and interviews were collected in a pamphlet simply entitled Street Transvestite Action Revolutionaries. It’s well worth the read. 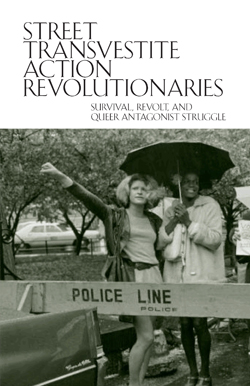 In Rivera’s essay Transvestites: Your Half Sisters And Half Brothers Of The Revolution, she described her understanding of the transvestite:

Transvestites are homosexual men and women who dress in clothes of the opposite sex. Male transvestites dress and live as women. Half sisters like myself are women with the minds of women trapped in male bodies. Female transvestites dress and live as men. My half brothers are men with male minds trapped in female bodies. Transvestites are the most oppressed people in the homosexual community. My half sisters and brothers are being raped and murdered by pigs, straights, and even sometimes by other uptight homosexuals who consider us the scum of the gay community. They do this because they are not liberated.

Transvestites are the most liberated homosexuals in the world. We have had the guts to stand up and fight on the front lines for many years before the gay movement was born.

As far back as I can remember, my half sisters and brothers liberated themselves from this fucked up system that has been oppressing our gay sisters and brothers — by walking on the man’s land, defining the man’s law, and meeting with the man face to face in his court of law. We have liberated his bathrooms and streets in our female or male attire.

…By being liberated my half sisters and brothers and myself are able to educate the ignorant gays and straights that transvestism is a valid lifestyle.

Looking back at the movement, she identified transgender community as being at Stonewall. From her speech Bitch On Wheels:

The night of the Stonewall, it happened to be the week that Judy Garland had committed suicide. Some people say that the riots started because of Judy Garland’s death. That’s a myth. We were all involved in different struggles, including myself and many other transgender people. But in these struggles, in the Civil Rights movement, in the war movement, in the women’s movement, we were still outcasts. The only reason they tolerated the transgender community in some of these movements was because we were gung-ho, we were front liners. We didn’t take no shit from nobody. We had nothing to lose. You all had rights. We had nothing to lose. I’ll be the first one to step on any organization, any politician’s toes if I have to, to get the rights for my community.

And by the way, she said this in that same speech about gay community:

I am tired of seeing my children – I call everything including yous in this room, you are all my children – I am tired of seeing homeless transgender children; young, gay, youth children. I am tired of seeing the lack of interest that this rich community has. This is a very affluent community. When we can afford to re-renovate a building for millions and millions of dollars and buy another building across the street and still not worry about your homeless children from your community, and I know this for a fact, because the reason I have to get clearance every time to come into this building is because I saw many of the kids before the building was renovated up the street, many of the children are sleeping on the steps of that church. I went in there with an attitude. I raised hell. Yes, maybe I did try to destroy the front desk, but I did not attack anybody. But what did this community center do to me? My thanks for everything I have done for this freakin’ community? Had me arrested and put in Bellevue! So I’m supposed to kiss their asses? No, I don’t kiss nobody’s ass cause I haven’t lived this long, because I don’t kiss nobody’s ass.

She described herself as a trans activist fighting for the gay civil rights bill in New York City. Again, from Bitch On Wheels:

[Y]ou know that it took the Gay Rights Bill here in New York seventeen years to pass. [It was approved in 1986.] But I’ll go through the beginning. When we were petitioning for the Gay Rights Bill, there was only one person that was arrested. That was me. Because I had the guts to go into the Times Square area on 42nd Street and petition the people to sign that petition. And the only reason I did it was because that bill did include the transgender community. Two or three years into the movement and the bill is being presented and we’re going back and forth to City Hall. They have a little backroom deal without inviting Miss Sylvia and some of the other trans activists to this backroom deal with these politicians. The deal was, “You take them out, we’ll pass the bill.” So, what did nice conservative gay white men do? They sell a community that liberated them down the river, and it still took them seventeen years to get the damn bill passed! And I hate to say it, but I was very happy. Every time that that bill came up for a vote, I said, “I hope it doesn’t pass,” because of what they did to me. As badly as I knew this community needed that bill, I didn’t feel it was justified for them to have it on my sweat and tears, or from my back.

From Rivera’s essay Queens In Exile, The Forgotten Ones: on identifying as a drag queen:

I left home at age 10 in 1961. I hustled on 42nd Street. The early 60s was not a good time for drag queens, effeminate boys or boys that wore makeup like we did. Back then we were beat up by the police, by everybody. I didn’t really come out as a drag queen until the late 60s. when drag queens were arrested, what degradation there was. I remember the first time I got arrested, I wasn’t even in full drag. I was walking down the street and the cops just snatched me.

In that same speech, she talked about wanting to give up on labels.

People now want to call me a lesbian because I’m with Julia, and I say, “No. I’m just me. I’m not a lesbian.” I’m tired of being labeled. I don’t even like the label transgender. I’m tired of living with labels. I just want to be who I am. I am Sylvia Rivera. Ray Rivera left home at the age of 10 to become Sylvia. And that’s who I am.

And, we’re left with the reality that while talking about terms that folk are offended by, Calpernia Addams — a woman I’ve respected for many years — well, she took offence at being called a drag queen — specifically as misgendering. She preferred showgirl as a non-misgendering term. Isn’t that also a form of language policing? Calling Addams a queen or a drag queen would have been appropriate in Sylvia Rivera’s early activism days. Hell, calling Addams a transvestite until the day she had gender affirmation surgery would have been acceptable in Rivera’s early activism days; calling Addams gay even though she’s attracted to men as a woman, would have been appropriate in Rivera’s early activism days — gay, as Rivera understood the term in the beginning days of gay liberation, covered the entirety of LGBT community.

Rivera said we were part of gay and lesbian community. Again from Bitch On Wheels:

[I]t seemed like everybody and their mother came out for Matthew Shepard. A white, middle class gay boy that was effeminate! Amanda Milan got killed [in 2000], five days before Gay Pride. We waited a month to have a vigil for her. Three hundred people showed up. What kind of a – doesn’t the community have feelings? We are part of the gay and lesbian community! That really hurt me, to see that only three hundred people showed up. And it’s not like it was gonna be a long vigil, I mean we went from 36th Street to 42nd Street. So, when we call people, not only to sponsor our actions, we expect to see bodies there. I mean, but like I said, we’re capable of doing it on our own because that’s what we’re learning now, after thirty-two years, that we cannot depend on nobody, except our own trans community, to keep pushing forward.

It’s a get-along-go-along moment for those gay and trans entertainers who want to hang onto LGBT terms that our under thirty LGBT community members in trans community now deem dehumanizing. We activists who have been around a while need to think about how to make the transitions of today’s transitioners easier than ours. We don’t need to put upon trans menials the terms and points of view of our earlier generations that they understand makes their acceptance as the fully human beings they are more difficult.