Fact Checking: anti-trans “parents of students” speak out at school board meeting

Charlotte Burrous, a reporter for the Canon City Daily Record asserted that parents of students spoke out at a school board meeting:

Parents of students in the Florence-Penrose School District expressed concern during Monday’s regular board meeting about a transgender Florence High School girl who has been granted permission by the school, and the district, to continue to use the girls’ restroom at the school. 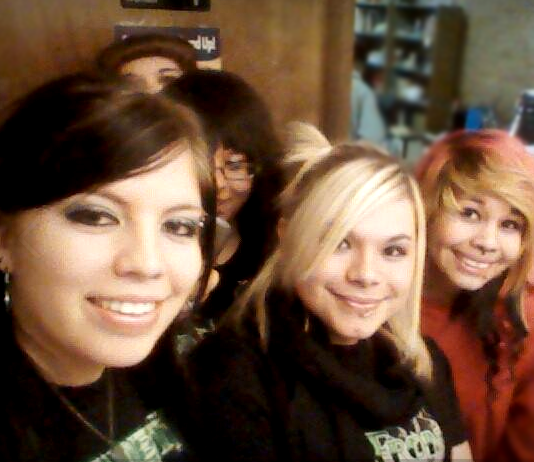 In the story, Burrous states that Carol Clemenson addressed the School Board saying, “But what about the girls rights? They’re victims.” From what Burrous chooses to report, what are readers to think about the folks who spoke at the School Board meeting? What narrative is Burrous constructing?

What if I were to tell you that Carol Clemenson wasn’t a parent of a child in the Florence High School School District, but one of several anti-trans activists from a town around an hour away from Florence High? What if I told you that she’s actually a Tea Partier who reports for a very Conservative newspaper? What if I told you that Clemenson believes that all of this trans stuff is part of an sick, ungodly, Obama conspiracy to destroy the nation?

Are any of these facts important to the story Burrous wrote? If so, why were they left out?

I called Clemenson in order to fact check Burrous article because my experience has been that time and again, media sources unquestioningly support anti-trans propaganda. Let’s review:

My call to Clemenson has done nothing to bolster my faith in the media’s ability to – in any way – question the fact assertions of anti-trans groups. In this case, we’re talking about people who drove a hour in order to publicly mock, belittle and berate a trans kid who was recently pushed to the brink of suicide by this type of behavior.

When I spoke to Clemenson, she was very clear that she strongly disliked transgender people, “I don’t support transgenders.” She elaborated, “It’s not right at all, because I do not support it. I think it’s wrong and, it’s just wrong… If they’re going against god’s will, they are dangerous and you need to watch out for them because they will destroy you.”

Clemenson spoke at the School Board meeting because she felt she was on a mission from god. “God is wanting us to stop some of this stuff if we can.”

The School Board has voted to go ahead and let him [sic] do what he [sic] wants to do, so the only way we can do this is to take it to a higher court. We’re gonna have to take all these people to court to get the rules stopped. I’m calling my Senator and we’re gonna see what we can do about this law because it is not right, it’s not fair to the girls, and as far as that goes, it’s not fair to the boys because who’s to say that he’s [sic] not going home and turning into a boy and he could be taking secrete pictures of some of these girls in the locker room, going to his [sic] friends and really having a gay old time with it, and doing a lot of pornography. You don’t know and nobody has checked into it and if they have, they’re not saying anything about it.

Recently a Colorado School Board member from another district (who’s an active member more than one anti-LGBT group) said that trans children should be castrated before being allowed to urinate and Clemenson agrees. “They aught to castrate the sucker. That’s what I told the School Board Monday night. ‘Ya aught to castrate the sucker before you let him [sic] into any girl’s restroom.’ That way, I know that he [sic] can’t rape anybody, but he [sic] could.”

Clemenson was quoted in the Canon City Daily Record as saying that cis girls were victims. She clarified that she felt they were victims, not because they were attacked or harassed (because they weren’t), but because they’re not allowed to bully trans girls. “The [cis] girls are the victims because, they’re the one’s who are being victimized, they cannot ridicule him [sic] and they have to show him [sic] respect.”

After Clemenson got warmed up, she went on to explain that all of this is part of Obama’s plot to destroy America. “Obama can put any law out there he wants, and it’s against the constitution, he don’t care! That’s the way it is. ” I asked if allowing trans kids to pee was part of “Obama’s agenda” and she said that it was, “Oh definitely! I definitely do [think so]. He’s trying to destroy this country and by golly he’s doing it and people have let him do it.”

Clemenson expounded on how the conspiracy works:

There’s so much that the gay rights have gotten, so much, that a lot of people are thinking that way so that they can get into a lot of different things and get a lot of free stuff, and be able to have the gay marriages, the insurance – because it’s cheaper for two people than for one – and, there’s just so many things that… I’ll be honest with you. I don’t know except that it’s just sick and it’s against the constitution, it’s against the bible!

Obama is destroying America. Completely. We have no respect. Countries were afraid of us because we stood up for what we believed in. And so many people – just like Israel, they took god out of Israel and look what happened. It got blown up. Alright, they’re rebuilt Israel, we can rebuild the United States if we get enough people together.

There’s not enought people that have the guts to stand up and say ‘No!’ and fight for what they want because too many people have gotten too much stuff – FREE – from Obama, they say, ‘Why would we fight it when we just don’t have to do nothing and we get all this stuff. We get food stamps, we get cars, we get this, we get that.’ I mean, there’s too many people who’s got a free handout.

I won’t accept the free handout. I don’t take the stimulus money. It’s been offered to me, but I ain’t gonna take it because it’s money that doesn’t belong to me and this is what people’s done. ‘You’re gonna give me $1000? Or sure, fine! I’ll take it!’ They don’t ask, but the strings are attached to it.

2013 4th of July flyer for the Southern Colorado Patriots Club

I am a supporter of Sangre de Cristo Sentinel (Tea Party newspaper) newspaper here in Westcliffe, it’s a newspaper we started up about 6 months ago. It’s a Conservative newspaper, it’s not Liberal, it’s very Conservative. We have reporters out there everywhere that, different counties are involved in it. We’ve got papers going all over the country.

Clemenson clearly states that she said – at the School Board meeting – that the School Board should castrate trans children and yet none of that made it into Canon City Daily Record. Why did Charlotte Burrous, reporter for the Canon City Daily Record paper edit out Clemenson’s true feelings? Why did Burrous claim that Clemenson was the parent of school children that went to school in that district if it wasn’t true? Burrous claimed that a second speaker, Jerry Hoel, was also parent of a school child in the School Board’s district but he lives in Clemenson’s town as well. Why did the reporter fail to mention that the town supports Jane Doe? What nuance does the reality that anti-trans bigots had to be caravanned in to attack Jane Doe because the town supports her?  Why do anti-trans groups – time and again – get a pass from the media?

Writers for the TransAdvocate work hard to bring you news and commentary. If you found this article meaningful, let the author know that you appreciate the work they do with a tip!
In categories:Best of TA Cristan Williams
Tags:civil rights Fact-Checking in the media Non-Discrimination transphobia
Next Post

For the 4th Day of TransGiving, the TransAdvocate has picked The Trans Youth Support Network (TYSN)!  TYSN is a partnership of youth and community members who work together to support trans youth in Minnesota. TYSN empowers trans youth to address…
Read
Previous Post

The Boston Alliance of GLBT Youth (BAGLY) is a youth-led organization that's worked with trans youth since the 1980s. BAGLY has a queer youth speakers bureau and youth led HIV/AIDS education program. Furthermore, BAGLY is where the nation’s first prom…
Read
Random Post

In the middle of a cool August night in 1991, Nancy Burkholder was thrown out of the Michigan Womyn's Music Festival (MWMF) because she’s a trans woman.  Burkholder was Janis Walworth’s friend and she was outraged that MWMF’s would engage…
Read
Random Post

I just recieved this from Phyllis Frye: By calling the Houston Police, national HRC deliberately set in motion a police over response. HRC used government and taxpayer monies to intimidate the hell out of TG and gender variant people who…
Read