Gina Gleason, director of the Faith and Public Policy and Watchmen “ministries” of Calvary Chapel church1, asserted that her church’s group, the Privacy for All Students (PFAS) coalition is suing the California Secretary of State because PFAS turned in their petitions late. 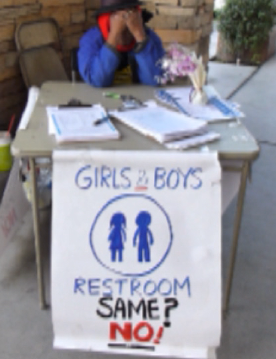 PFAS signature gatherer hiding face after being caught fraudulently misrepresenting the issue to voters, a crime under California election law.

The law (AB 1266) protecting transgender children says schools must treat transgender students as equal to cisgender students. PFAS is the Pacific Justice Institute (PJI) front group2 that organized the effort to repeal AB 1266. PJI is the ex-gay group who recently bullied a Colorado trans kid to the brink of suicide. PFAS, worked tirelessly to paint trans children as threats, sexual deviants an unstable. Their campaign of lies, fraud and intimidation produced over 600,000 signatures in support of discriminating against trans children.

The goal of PFAS was to collect 505,000 valid signatures in 90 days. If they collected those signatures, it would have stopped the trans equality law from taking effect in January and put the civil rights of trans kids up for a popular vote in November 2014.

PFAS, is upset because it’s looking like their effort to repeal the law will fail because a significant portion of the signatures they turned in are not valid. PFAS is therefore highly motivated to ensure that all signatures are viewed as being valid – even those signatures PFAS turned in late. In a press release issued today PJI asserted, “PJI and the Privacy for All Students coalition is committed to make certain that every signature is counted.”

In a PFAS press release Gleason said, “The Secretary of State has made clear her bias against this referendum in the multiple obstacles presented to PFAS over the last several months. It is a shame that we have to ask the court to direct her to respect the thousands of registered voters in these two counties that signed petitions to qualify this referendum. But we believe that the court will ask her to count these signatures.”

Picking up on Gleason’s conspiracy narrative, PJI likewise said, “It is ironic that California’s chief elections official does not give a second thought to disenfranchising the voters from Tulare and Mono counties.”

While Gleason ironically failed to respond to my inquiries because she left early Friday for a holiday vacation, a spokesperson for Gleason told me, “There was an issue because the 90th day fell on a Sunday. Some of the counties agreed to open up special [that Sunday] to take the petitions, but some closed that Friday for a holiday weekend.”

When I asked about the conspiracy narrative being pushed by the PJI front group, Gleason’s spokesperson said, “We serve a big sovereign god and this is not surprising to him. He calls us to do what we need to do and he’s gonna bless those efforts.”

1.) Here’s the Calvary church pastor lying about AB 1266 for PFAS. Gleason’s LinkedIn shows that she’s the director of a group called Faith and Policy. This group clearly represents itself as a organization unless, of course, Calvary Church is mentioned. Then it’s represented to be merely a church title:

The Watchman, which holds a 501c3 nonprofit status, identifies her as their director as well:

2.) PFAS is a front group for the following anti-LGBT organizations:

The Paradise Post decided to feature one the more ridiculous talking points on offer by anti-equality forces. The "Specificity Critique" is when bigots decry trans equality laws for being policy instead of procedure. I find it ironic the same people who…
Read
Random Post

Today we have a couple of letter related to “male” appearance and expression. I now turn it over to the writers. A reader writes: “I was looking back on an old post where you stated trans guys all ‘pass’ after…
Read
Random Post

It’s happened. TERFs and the people who DEFENDED Prop 8 have untied as one voice to proclaim that pre/non-op transwomen - as a group - are 1.) icky because 2.) they’re actually men, and therefore 3.) a danger to cisgender women.…
Read
Random Post

As you may know, most of the TS Separatist leaders have moved on with their lives and the ones who are left seem to be the Ashley Love/Just Jennifers of the world who regularly make absurd and demonstrably false claims.  I will continue to…
Read