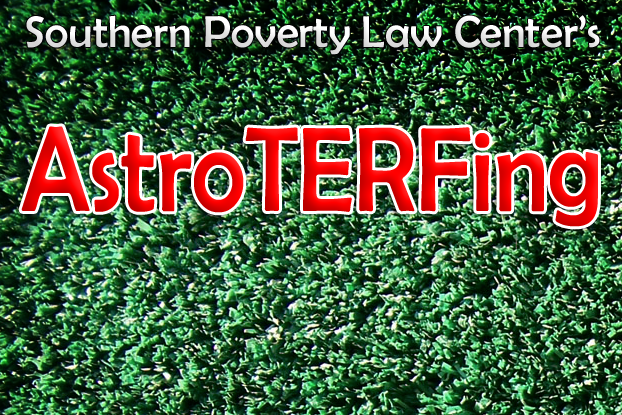 SPLC will when it comes to a “gay-bashing, revenge-seeking black nationalist” who works at the Department of Homeland Security.

An employee at the Department of Homeland Security runs a racist website in his spare time and advocates the mass killing of white Americans, gays, and black leaders he believes are traitors, according to a report by the Southern Poverty Law Center. Ayo Kimathi, a small business specialist at Immigration and Customs Enforcement, a branch of the DHS, is a “gay-bashing, revenge-seeking black nationalist” who runs the website War on the Horizon. The site calls for mass murder of white people, rails against “fag rights,” and attacks a slew of black celebrities as “race traitors.” In a statement, the ICE said it “does not condone any type of hateful rhetoric.”

“On Wednesday, the Southern Poverty Law Center published a report about Kimathi, who goes by the name “Irritated Genie” online, describing him as “a gay-bashing, revenge-seeking black nationalist who advocates on his website – War on the Horizon – the mass murder of whites and the ‘ethnic cleansing’ of ‘black-skinned Uncle Tom race traitors.’ “

SPLC’s inaction only enhances the suspicion that it employs one or more revenge-seeking white TERFs who are stopping SPLC from giving the trans-exterminationist radphlegm movement the designation it has earned.

What are the top 3 things you like about being trans?

There is so much hardship, pain, grief and oppression we as trans people face. Sometimes it seems that no matter where we turn, the only image we see representing us (in movies, books, articles, etc.) is the hardship and the…
Read
Previous Post

Thoughts On Chelsea Manning's Coming Out

I have some thoughts on how Pvt. Chelsea Manning's gender dysphoria was rolled out. Let me begin by saying I'm going to give, and I'm going to advocate for, respect for Manning's chosen name and publicly embraced gender, and I'm…
Read
Random Post

Creating a world without fear

TW: transphobic violence Like a lot of people, I was transphobic when I was younger. Society had conditioned me to be. There were men and there were women, and anyone who didn’t fit into the narrow definitions of one of…
Read
Random Post

The Observer recently featured a photograph of a tourist casually sexually assaulting a trans feminine performer by slipping his hand under her dress and squeezing her breast while posing for a picture. The photo was featured as one of the best photographs…
Read
Random Post