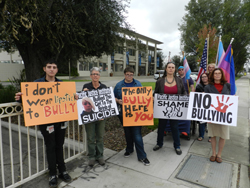 On November 19, 2013 — on a day before the annual Transgender Day Of Remembrance — The Transadvocate organized an action in front of the Trinity Law School in Santa Ana, California entitled Judgment Day For The Pacific Justice Institute. The reason why is because there is an office in the school where Michael Peffer, the Senior Counsel at the Pacific Justice Institute (PJI), works as a both representative of the Christian Legal Aid Office and PJI. PJI has a phone number that rings at that office — the office functions as the southern California office of PJI. 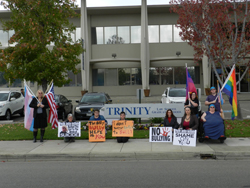 Our action at PJI’s SoCal office was two-fold: 1.) Tell them that we want them to stop bullying and harassing Jane Doe, the transgender youth who attends Florence High School in Florence, Colorado, because their bulling and harassing brought her to the brink of suicide, and 2.) ask them to have Michael Peffer (or any other representative at PJI) come out and tell the two trans youth in the group of ten community participants that they are bullies, and that they are “inherently harassing” to other teens in restrooms they use at their public high school.

Not surprisingly, no representative from PJI came out of PJI’s southern California office to tell the trans youth they were bullies and harassers. Brad Dacus, the executive director of PJI; Matt McReynolds, staff attorney at PJI; and Tim Lefever, board member of PJI, have no problem stating that trans youth are bullies and harassers in the confines of conservative and religious right media, but apparently no representative of PJI will say that to the faces of trans youth in the brick-and-mortar world.

Listen to why Anthony, a trans youth who identifies as a biracial, genderqueer trans woman, participated in the Judgment Day For The Pacific Justice Institute action (Twitter: #JD4PJI).

Cristan Williams, the editor of The Transadvocate, will be posting more audio, videos, and images from this action fairly soon.