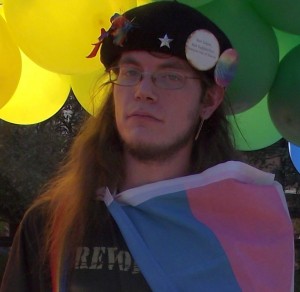 Walter Beck is from Indiana. A street activist, poet, and queer gonzo journalist, Walter has been called a mix of Hunter S. Thompson and the Stonewall Riots with a strong shot of Mick Jagger. At home on the picket lines and in the headlines, Walter’s work has been featured in numerous LGBT literary magazines, he is a regular contributor to the British digital queer arts magazine Polari and co-hosts a Sunday night radio show on the Outright AZ Network on BlogTalkRadio called The Rainbow Asylum.