First up, here’s a wordcloud representing what we’ve talked about here on the TransAdvocate during the past month:

Here’s what we’ve been talking about over on our Facebook page during the last week in February: 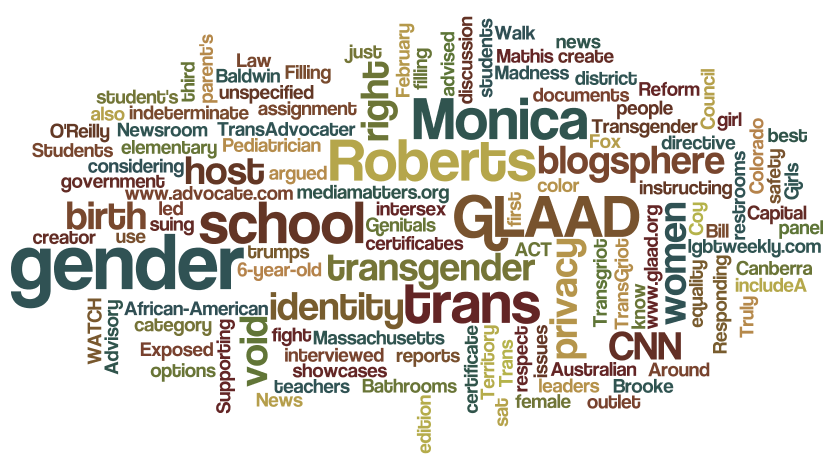 In a TransAdvocate poll we asked, “Do you feel that as a trans person, you must behave in a manner that is expected of your presented sex?” and 162 of you answered:

In a recent FaceBook poll we asked,  “How long ago was it that you first recall noticing trans written with an asterisk (trans*)?” and 69 of you answered: 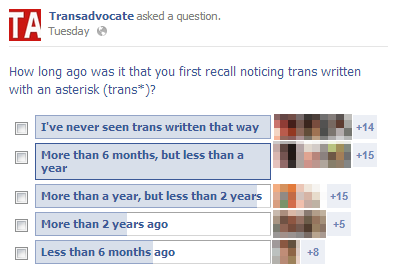 Here’s what you had to say about the trans* meme:

[list type=”arrow”] [li]I hadn’t noticed until a friend asked me about it after I shared Annika Penelope’s Autostraddle article.[/li] [li]Personally I can go either way. When I use specifically use the word trans without the asterisk I am referring to all people in the spectrum of trans.[/li] [li]So, if you are transsexual you get an asterisk? Wow, do I feel special now.[/li] [li]When I first saw “Trans*”, I interpreted the intent as being as inclusive. I still think of it that way[/li] [li]That’s what I though too, and that’s how I’ve always seen it described.[/li] [li]Transadvocate, I don’t feel strongly either way about the asterisk but I appreciate the inclusiveness of it. I usually use it when talking about trans* people in general, referring to the broader bunch of us under under the umbrella.[/li] [li]This is the first I’m hearing about an asterisk…[/li] [li]Personally I like it, both from an inclusiveness standpoint – and from a typing standpoint![/li] [li]i don’t really understand the significance of it. it’s not like you can pronounce an asterisk[/li] [li]It’s pretentious to me. It often gets represented much like, ‘I’m trans but different than you and I need an asterisk to be recognized and validated by my community that I want to be a part of but demand to be recognized differently from. If you don’t acknowledge my identity with an asterisk then you are exclusionary and discriminating against me’. It’s very false inclusion to me, and quite unnecessary since trans itself is already understood to include any form of gender non conformity / gender variance.[/li] [li]It doesn’t bother me either way and I don’t think from a literary standpoint that it will affect transgender writing at all, whether it is used or not.[/li] [li]from the start it’s othering & defeats it’s own purpose, I dont use it.[/li] [li]All I can say is at least within the past year.[/li] [li]Yeah, IMHO it seems pretentious.[/li] [li]Putting * on the end of trans means… exactly what trans meant before adding an *. I’m supposed to use trans* because trans isn’t inclusive. I think it’s another one of those stupid transpacewoman things pretentious people do so they can claim offense when you don’t do it.[/li] [/list]

The most evocative article this month was, by far “Trans Rapper Murdered: The Official Story vs. The Friend’s Story” – drawing more emotional responses (by far) than any other story. Here’s the most evocative stories, by reaction:

You were most interested in the following 5 TransAdvocate stories in February:

And lastly, some miscellaneous TA info from last month: