While United States transpeople are gearing up for a battle to openly serve in the military long since won in other nations such as Canada, Israel, Spain, the Czech Republic and Australia, our Thai transsisters recently won one just to not be labeled insane by their military for being themselves.

In Thailand all males starting at age 21 until age 30 are entered into a subscription lottery to serve two years in the military.   Because as of now in Thailand you aren’t allowed to change the gender designation on your ID cards, they also include transwomen in that military draft lottery as well.

If your trans and don’t want to be in the army, you fear your number being called more than anyone for various reasons.

When you’re living as a transwoman and you win this lottery, that’s problematic  Not only do you have to spend the next two years of your life in military service, it means enduring a medical entrance exam in which they have you take off your shirt and measure your chest in full public view on Military Conscription Day.  No thanks to modern communications technology, photos of those transpeople’s chests end up on the Net the next day.

To mitigate the embarrassment to transpeople and protect the draft ritual, several years ago trans inductees examinations were moved into a private room, but the harassment continued.  Having your long hair cut and you being denuded of the very femininity you spent years building up when you didn’t want to be in the military in the first place is traumatic to the transwoman as well.

To add to your drama, your posting could range anywhere from a dull military duty one to patrolling the southern Thailand-Malaysia border engaged in fighting in the seven year conflict against Islamic insurgents that has killed over 4,500 people. The insurgents also have a penchant for beheading troops they encounter.

That designation messes with your job prospects, and despite the ‘Land of Smiles’ international reputation as a trans friendly place, there are still transphobic elements of Thai society who engage in discrimination against transpeople. 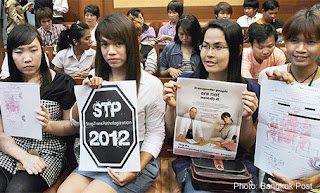 Thai transwoman and Bangkok resident Samart ‘Sweetwater’ Meecharoen discovered this the hard way in 2006. After the insane’ label on her 2005 conscription military records destroyed a promising job interview, she sued the Ministry of Defense over it

The designation not only hurt her employment wise, it messed with her ability to open bank accounts in Thailand and getting a visa to travel to other nations.

After relentless activism since 2006 instigated by her over this issue, the Thai military has agreed to stop labeling the records of trans inductees they dismiss in that manner.   They proposed substituting ‘gender identity disorder’ for it, but human rights group nixed that one as well.

The Thai military will now use a classification system that shows draftees as either Type 1, Type 2 or Type 3 in addition to amending the part of nation’s Conscription Act of 1954 that states transgender people are exempt from conscription because they are considered psychologically abnormal .

Thai transpeople have been able to serve in their military since 2003 and it seems that some continued activism is needed on this issue. It would allow the Thai military to fulfill its needs for conscripts and Thai transwomen who end up being drafted to spend their two years of service serving their nation honorably, openly, proudly and without harassment.

The fight continues around the globe to respect the human rights of transwomen to get married.   Check out this interview on Indian television with trans activist Kalki.
Read
Previous Post

Tomorrow' ABC will broadcast a Primetime Nightline segment starting at 10 PM EDT/9 PM CDT that will focus on transkids.  The segment will focus on 'Princess Boy' Dyson Kilodavis, Germany's Kim Petras, who started her transition at age 10 and…
Read
Random Post

Me & Judge Frye Today Phyllis Frye (America's first out trans judge) and I met up with Nikki Araguz at the 13th District Court of Appeals for the hearing on how Texas will view the transitioned status of trans folk.…
Read
Random Post

This guest Transadvocate post comes from Natalie Reed. Reed describes herself as "a magical young woman who lives in the mists and pines of Vancouver, British Columbia, where she fends off the oppressive gloom and darkness basking in the warm…
Read
Random Post

According to an unsigned WaPo editorial, Maryland: passed a law banning discrimination against gay people a decade ago, but transgender individuals were dropped from the legislation. Since then, attempts to repair that have failed at least four times in Annapolis, even…
Read
Random Post

This update is from a peer LGBT community activist who wants to remain anonymous. The update is accurate as of the December 4th update found on the California Secretary of State's page on the AB1266 referendum update page. • Counties…
Read