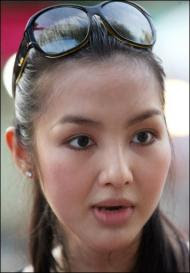 Some wonderful news coming out of the Land of Smiles is that an accomplished transwoman and local activist is running for political office.

That history making transwoman is 30 year old Yollada ‘Nok’ Suanyot and she is not only familiar to Thai citizens thanks to newspaper stories about her, she has been one busy and accomplished lady since since she underwent her surgery at age 16.

She runs a satellite television station, gained her PhD, was once a member of an all-trans Thai pop group called Venus Flytrap, owns a jewelry business, is the current President of the TransFemale Association of Thailand and has been a strong advocate for TBLG rights in the Land of Smiles.

She is competing for a provincial office in Nan Province in the upcoming May 27 elections against two cis male candidates and is trying to become the highest ranking trans elected official to date in her homeland.   As of this moment no Thai transwoman has been elected to anything higher in Thai politics than small district-level positions.

So why is she running for office? “I’m confident that my experience and ability will be useful in the development of Nan,” she said.  “I want to represent the trans women and all groups of homosexuals across the country in parliament and press the government to pay more interest to women and trans women,”

She is also has a political platform addressing the flooding issues in her province, wants to set up a 24 hour citizens complaint hotline to deal with issues that need governmental attention and wants to have an increased focus on youth services and issues.

Good luck to her, hope Yollada makes some history and breaks another glass ceiling for transwomen in the Land of Smiles.  We hope it also becomes just the first step of her journey towards being elected to Thailand’s parliament.