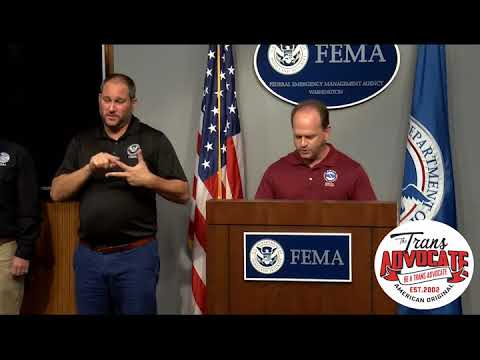 The North Carolina, South Carolina, and Virginia trans communities are at significant risk of taking a direct hit from one of the region’s largest hurricanes of the last 50 years. Hurricane Florence will be a catastrophic disaster and thousands are already displaced due to mandatory evacuations. North Carolina, home of HB2, banns cities from protecting LGBT people from discrimination. Add to that a Trump education and housing department that embraces trans discrimination as a matter of policy, the trans community in the path of Hurricane Florence are at risk of the one-two punch of surviving a natural disaster to only then face discrimination and systemic oppression as they try to recover from the disaster.

According to Rebecca Dunn, chairperson of the Carolina Transgender Society, the local trans community lacks the infrastructure to coordinate a response to the hurricane saying, “Larger cities might be proactive, but the rural areas aren’t, let’s just say, kind to us and the reality is nobody knows what to expect because just about nobody has lived through a storm like this before.” She went on to say, “unfortunately, the trans community throughout the region is somewhat fractured which impairs its ability to respond to something like this in an organized way.” For this reason, Dunn will be coordinating with the TransAdvocate to get news out about the region’s trans community during and after Hurricane Florence while also getting the word out to the local trans community about the Trans Disaster Relief Fund.

Last year, the Houston trans community responded to Hurricane Harvey by setting up the Trans Disaster Relief Fund. Members of the trans, intersex, and genderqueer community can lose everything in natural disasters, experiencing extreme difficulties in disaster situations. Making it worse, attacks by lawmakers and community leaders against trans people have resulted in an environment of heightened hostility. Funds have already helped disaster victims recover from hurricanes, floods, freezes, earthquakes, and fires throughout the Americas.

In preparation for this impending disaster, the Trans Disaster Relief Fund is asking the public to help in the following ways:

➔ If you know trans, intersex, or genderqueer people in Hurricane Florence’s strike zone, please check on them.

➔ If you are able, please donate to the Trans Disaster Relief Fund.