As a subscriber and reader of your paper, I would like to comment on the Christopher Street West Parade held last Sunday (June 23) here in L.A.

I consider myself pretty well up on what is happening regarding current affairs relevant to our segment of society, and I felt this type of demonstration was a great idea.

I guess I thought too soon. That parade did more harm than good. By showing us off as a group of silly freaks, those queens sure lowered our public image to the level public opinion has had it set for years.

How can we make demands for equality, based on our rights as normal citizens, when our public image is constantly destroyed by flamboyancy and poor taste.

I, as much as anyone else, really enjoy a campy good time, but a public demonstration is not really the place for dropping beads and “in” jokes.

Where were the “normal looking fags,” the college types and so on, whose appearance would bolster our image?

If we can’t get ourselves together for a better show than that parade, we’d better forget the whole idea, rather than destroy what dignity we have left.

I am sure everyone concerned meant well and had sincerely honest intentions; nevertheless, it was a poor show.

Remember, the ‘queens’ had the balls!

This is addressed to the “Name Withheld” correspondent regarding the Christopher Street West parade. As I reside in Brooklyn Heights, I can only refer to our own demonstration in which I proudly participated. I do believe, however, that both parades were quite similar.

I would like to know if the anonymous correspondent participated in the march or if he remained on the sidewalk, afraid to commit himself. Also, he should remember that the homophile community ranges from flamboyant drag queens to conservative closet queers—but we are all human and should join together in this our common struggle. Please don’t forget that it was the DRAG QUEENS who fought back last year, not we closet queens.

I’ll tell you where the “normal looking homosexuals” were. They were at the beaches, the theatre, away for the weekend, ad nauseam, because they are not yet liberated from themselves.

The use of the word “fag” by the correspondent indicates a deep self-hatred which should he corrected.

When the correspondent is no longer afraid to use his name in your publication and learns to adept ALL his brothers and sisters, then and only then will we succeed in our peaceful revolution. 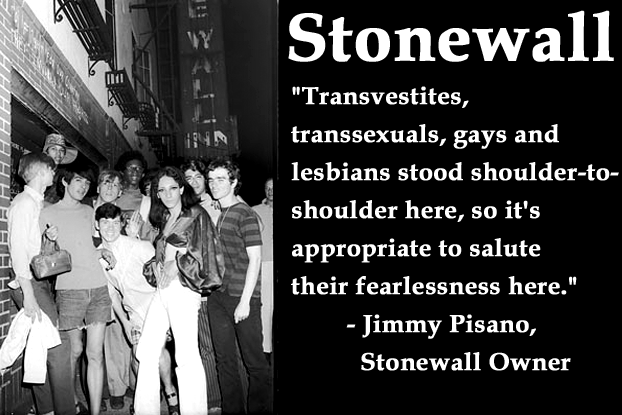 ENDA via Executive Order On social policy, Obama is reconsidering whether to issue an executive order prohibiting federal contractors from discriminating on the basis of sexual orientation or gender identity. When he decided not to issue such an order last…
Read
Previous Post

After my last post about a profile on Grindr using ex-gay writer Matt Moore’s photo and personal details, I contacted Moore, who responded as follows: The grindr profile was really mine. I’ve been on it on and off for the last couple…
Read
Random Post

Any Excuse to Denigrate Radical Feminism

For the past week or so I've been digging through just about every post I could find about this post on I Blame The Patriarchy. I was planning on writing a mega-post in response to the different blog posts I…
Read
Random Post

Updates from the Brazilian division of the Trans Advocate:   The Brazilian Supreme Court approved a policy that would give trans people the ability to correct our legal identification, without having to have surgery. While this policy was decided last…
Read
Random Post

Gays Who Want Marriage: $10 Million to Smother the Employment Needs of All Trans People (and Most LGB People)

From The Land of The John: Via press release from Freedom to Marry, background on their new "Why Marriage Matters" Campaign: Freedom to Marry will be running ads nationwide featuring gay, lesbian and straight couples talking about why marriage matters…
Read