I Believe There’s An LGBT Community, But…

One of the ongoing arguments I hear and I reject whether it comes from the LGB end of the spectrum or the trans end of it is that ‘there is no LGBT community’. Granted I’ve railed more than a few times on this blog about some of the contentious history that has occurred between elements of it, but the evidence is overwhelming that an LGBT community exists.

While I believe there is an LGBT community, at the same time I as a person of color have seen, heard and experienced enough negativity to give me pause.enough to seek to emulate what my people have done in interacting with a predominately vanillacentric privileged parent society.

The BTLG community as a microcosm of the society at large has the same drama, race, class and inequality issues that permeate the parent society and just because we fly rainbow or pink, white and blue striped flags it didn’t change that dynamic one bit.

Black trans and same gender loving (SGL) peeps still get called the n-word just as quickly by people inside this community as they do by knuckle-dragging idiots outside of it.   So to combat that, for our own sanity and well-being we POC members of this contentious group we interact with have to do our parts to ensure we have vibrant trans andsame gender loving communities of our own across the nation..

It’s why during this Black History Month I’m making sure that trans history makers get highlighted on my  blog and my Facebook page.  It’s why the National Black Justice Coalition got founded ten years ago and the Trans Persons of Color Coalition got founded in 2010.  I don’t doubt because of that same dynamic you will soon (if it hasn’t happened already) trans and SGL organizations that cater to the issues unique to the Latin@ community.

We aren’t doing it just to separate from predominately white TBLG groups as we’ve been accused of doing, but to strengthen our own voices.   We’re owning our powerand pointing out to the members of the ethnic groups we belong to that yes, we exist and being a person of color and trans, gay, bi or lesbian is not an oxymoron.   We’re addressing in our ranks the shame, guilt and fear issues by building pride in being same gender loving and trans people of color.  That’s needed so that we can be better, more powerful allies in our common human rights struggle. 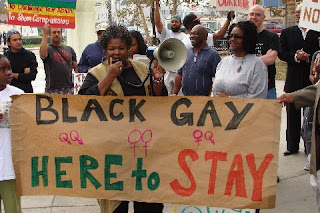 We’re also calling attention to the fact that we’re feeling marginalized, invisible and ignored in the greater GLBT community and that policy issues need addressing besides ‘all marriage all the time’.
.
This LGBT community is a diverse group we are a part of, and we all agree that our human rights as BTLG citizens of our nation must be respected and protected under the laws of our land and the ‘We the People’ in the United States Constitution also applies to trans and same gender loving citizens of this nation

I believe there is an LGBT community.  But because we are a diverse bunch, much work has to be constantly done to ensure we are all on the same human rights page and keep moving forward to accomplish our human rights goals.

The POTUS noted Stonewall in his 2013 inaugural address: We the people declare today that the most evident of truth that all of us are created equal -- is the star that guides us still; just as it guided our forebears…
Read
Previous Post

Years before my transition, when asked how I felt about abortion, I would jokingly I would say, "personally, I'd never have one." It was my way of wiggling out of this very sensitive hot button issue without really answering the…
Read
Random Post

Supposedly, as the RadRight narrative goes, the California bill protecting trans kids in school is anarchy and madness. Unsurprisingly, TERFs and H-BSers jumped on that narrative: You know what? BS. Here in TEXAS - yes, conservative TEXAS - we've had these…
Read
Random Post

Join the TransAdvocate in supporting trans, intersex, and non-binary scholarship with the dual presentation of the indie film, Queen of Cups. Showing for two nights, this streaming movie Zoom event will feature Q&As by the film’s director Sharon Ferranti: https://www.youtube.com/watch?v=i9IQNnnMIIc…
Read