I just recieved this from Phyllis Frye:

By calling the Houston Police, national HRC deliberately set in motion a police over response. HRC used government and taxpayer monies to intimidate the hell out of TG and gender variant people who drove in to participate, but were scared away.

I hope the Advocate or Blade or Voice do a freedom of information act request to determine how much money was used to cover the HRC “false alarm.” I think the City of Houston should bill National HRC for the knowing “false alarm.”

Only 11 folks were brave enough to show when driving in and seeing the police riot set up that HRC had triggered. Three were from out of town. A threat, we were not! THERE WERE NO INCIDENTS.

The tenor I’ve heard from other national GLBT leaders (including some leading Executive Directors) is that Phyllis Frye is either mistaken or dishonest in her belief that HRC is trying to intimidate transgender people. I’ve been told that it is S.O.P. (standard operating procedure) when there is a protest of an HRC dinner that the police are called by the local HRC that hosts the event. That being said, do you think that this is an appropriate response to 11 transactivists?

I’ve organized or co-organized many a protest (see my about page for a list) and we’ve never had more than a few officers. We always alerted the ACLU and they sent monitors: 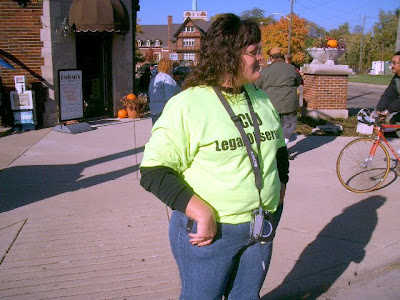 At our “Rally at the State House” in Indianapolis we had almost 1000 people, yet didn’t have six mounted police officers.

If HRC is trying to mend fences or wants to bring transgender people back into the fold, intimidation is not going to help do that. It only reinforces the idea that we are pawns, to be moved and ordered as the HRC wills us to.