As an educator, it is my duty to give all students an opportunity to learn and to succeed. In service to this duty, Universities are legally required to maintain a non-hostile environment. I am also devoted to imparting information that may be incongruous with my students strongly held beliefs. With the goal of meaningful instruction and students’ personal growth in mind, I may encourage frank discussions on topics that some students would rather avoid. This is the nature of education. How faculty and institutions can best navigate their responsibilities as educators is a real and vital conversation that has, unfortunately, been hijacked by media clowns and pseudo-intellectual propagandists.

The “anti-political correct” movement may wave the banner of “Free Speech” but ultimately undermines academic autonomy and balance of power within the marketplace of ideas. For example, self-professed “small government” Republicans had no problem misusing governmental power by threatening to discontinue funding to cancel course offerings, circumvent university policy and due process to get rid of undesirable professors, and attempting to remove and replace the board of trustees of a university through executive order. 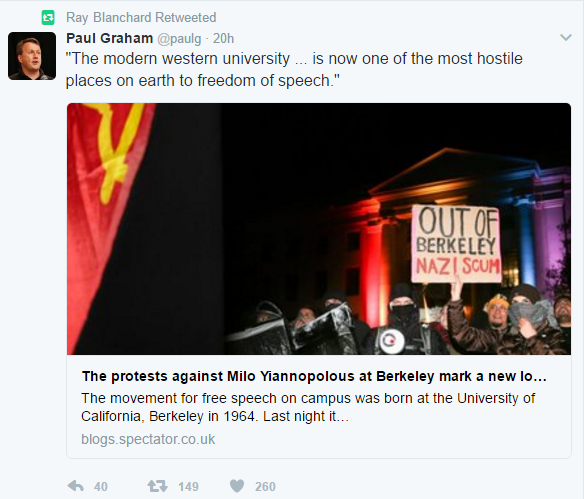 Educators like myself often feel the need to nuance the way in which we approach certain subjects, such as evolutionary biology or early American history or human sexuality, to avoid being torn apart in student evaluations, accused of being part of a vast atheist and/or liberal conspiracy or be branded as a public-relations liability. No worry, our White Knights (like Milo and company) are coming to our rescue! However, they aren’t concerned with our desire to discuss facts without professional consequences. Apparently, to them, what we require as a standard of academic freedom is the “freedom” to call a student “tranny.”

If you haven’t heard, Milo “Nero” Yiannopoulos, Britain’s world-famous professional internet bully, gave a talk at the University of Wisconsin – Milwaukee. During this talk, he displayed a picture of a trans woman early in her medical transition. He encouraged the audience to make fun of her appearance. He called the woman a man. He joked about wanting to fuck her as evidence that she was a man. He implied that she wanted to use women’s locker room and restroom facilities for some predatory purpose. He referred to her with a slur. He used her former name. Unknown to Milo, she was in the audience, shocked and frightened that she might be recognized by the crowd laughing at her.

To assuage any guilt, the student group that brought Milo to campus claims that the student brought this on herself. Milo and crew will never take responsibility for their actions. 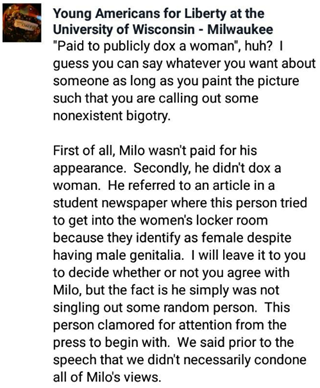 The circus of the “alt-right” is so divorced from the ACTUAL fight for academic freedom that it would be laughable if the results weren’t so damaging. Insults and slurs do not add to a rich educational atmosphere. This is basic. They do however contribute to a hostile atmosphere. The incident of a student being bullied and ridiculed from the stage at an event on campus is not a win for “free speech” it is simply a gross failure to uphold our legal and ethical responsibilities to maintain a non-hostile environment for all students. It does not represent a “gray area” that needs to be looked at very closely for fear of setting up a chilling precedent. At no school is it a threat to academic freedom to disallow students to violate a University’s Code of Conduct via proxy. Milo crossed way over the line and every college campus is completely within their rights to say “no.” Not only are they justified in saying “no,” it has now become an ethical responsibility to say “no.”

I find it hard to believe that his antics weren’t well-planned. He got exactly what he wanted. His name was in the news again. Any attempts to disinvite him from speaking on a college campus continued to be spun as him being “silenced” due to the emotional deficiencies of “special snowflakes” that are afraid of “the facts.” This is what he does.

Let me make this clear. Academically, Milo adds nothing. He has no expertise. He holds no truths or insights that others lack. His appeal caters only to those who confuse conflict with debate, who confuse talking-points with facts, who confuse cruelty with courage. He does not fight for academic freedom but caters to the backlash against the type of authentic education that faculty have been fighting for the freedom to provide for a very long time. He symbolizes what he claims to hate in so many ways. His only value is to provide a case-study on mass manipulation, media-driven performance art and the power of charisma.

I will explain to you what faculty fear. We fear the cultural shift in our institutions from teacher/student to business/customer relationships. We fear the degeneration of the faculty governance model for the sake of administrative-heavy controversy-adverse expedience. We fear the repercussions of instruction being conducted by low-paid high-turnover lecturers with very little job security or institutional investment. We fear our disposability. We cringe when our students latch onto popular bullshit and wonder how to provide them with a meaningful education that challenges them without prompting anyone to ask to speak to our manager — I mean dean. We fear a culture that ignores or even despises nuanced expertise and the accumulation of knowledge. We fear a government who asks for lists of names of researchers who hold certain views. We fear policymakers and businesses who redact and fail-to-fund research that doesn’t say what they want it to say. These are not partisan fears.

Milo is not helping. He is just an example of a larger miss-framed discussion about “freedom of speech on campus” that blames “political correctness” for chilling academic freedom all while the “anti-PC” alt-right slowly demolishes it with attacks on intellectualism, research, and academia at every turn. As an educator, I do not fear “political correctness” nor do I feel the pressing need to fight for my right to create hostile environments that work to exclude some groups while coddling others.

Finally, one of Milo’s talks was cancelled but not due to concerns for students but for concerns for Milo’s safety. Likely viewing Milo as an appropriate target for anger toward the Trump administration, which prominently features Milo’s boss Bannon, “masked agitators” described as the Black Bloc caused this cancellation with rocks, fireworks, and jars of red paint. It seems that violence succeeded where peaceful protest and reasoned argument failed.

Although I understand the delight some have taken in seeing Milo, a man who’s bread and butter is calling his detractors cowards, literally fleeing; I fear what consequences these actions may have. Unsurprisingly, Milo has accused the protesters of fearing “free speech” and undoubtedly his fans feel their panic over “Cultural Marxism” is vindicated. Milo’s book sales are booming.

Trump, of course, in his usual way, tweeted about the incident. He used the violence at Berkley to further undermine the independence of academia itself. UC Berkley allowed the talk to happen. UC Berkley protected Milo and his group. UC Berkley condemned the violence. The agitating group does not appear to be associated with the school or its students. However, those are facts, not “alternative facts” and UC Berkley must be punished and be reminded that they operate at the pleasure of the President. 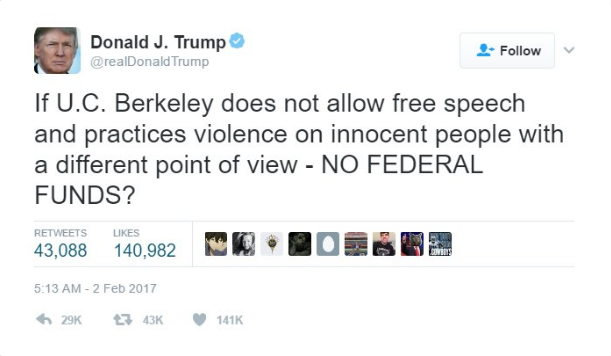 M. A. Melby
M. A. Melby grew up on a farm in rural Minnesota. She studied physics and music as an undergraduate and applied physics and computer music composition at the graduate level. She currently teaches physics. During her college years, she was highly involved in student government and served as the Minnesota State University Student Association Cultural Diversity Representative from her campus. She is active on twitter and serves as a Block Bot administrator; frequently documenting online abuse. She was the lead author of the change.org petition presented by Secular Woman, asking the Southern Poverty Law Center to list Gender Identity Watch as a hate group.