Save me, Lord, from lying lips and from deceitful tongues.
Psalm 120:2 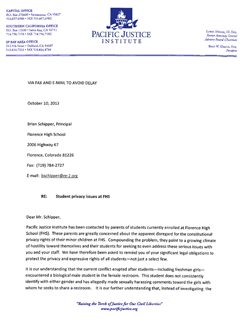 The Pacific Justice Institute (CRI) stated in their Letter to the principal of Florence High School (dated October 10, 2013 and posted with a press release on their website

A variety of options are available to [Florence High School] to protect the privacy of all students. Pacific Justice Institute recently presented testimony to the California Legislature on AB1266, the unprecedented legislation to open sex-segregated facilities to transgender students. As such, we are very familiar with all of the arguments for and against going this direction, and we recognize FHS’ approach as being based in common misperception about this issue. For instance, one of the most radical school districts in the nation, San Francisco Unified (SFUSD), embraces transgender rights but still takes precautions to prevent abuse. SFISD testified to the Legislature that they require students to consistently and exclusively identify with one gender for the entire school year — a common-sense precaution that does not appear to have been implemented at FHS. Ardent proponents of this bill also acknowledged the need for schools to offer accommodations that balance the rights of all students. Since Colorado law and local board policy are not nearly as far-reaching as California or SFUSD, there is even less justification for treating some students as second-class when it comes to their privacy rights.

Apparently Karen England, executive director of the Capitol Resource Institute (CRI), disagrees on the whether or not trans people should be accommodated with “San Francisco Values” in public schools. England was quoted in American Decency’s San Francisco values put kids in danger as stating:

AB 1266 forces San Francisco values on all California schools. This is a very radical idea. You’re going to have first-grade boys going to the restroom next to first-grade girls without any supervision.

PJI and CRI are both founding members of the Privacy For All Students (PFAS) coalition.

The integrity of the upright guides them,
but the unfaithful are destroyed by their duplicity.
Proverbs 11:3

Perhaps the issue of accommodating trans students at all isn’t really the point for PFAS. Perhaps the point of any referendum is to create a “Culture War” wedge issue that may benefit California Republicans this coming November. From the San Francisco Chronicle‘s California’s right pins hopes on transgender issue:

[C]onservatives believe [AB1266} could change the dynamics of an otherwise sleepy 2014 election year. The result could be a new round in the culture wars that would reverberate nationally – this time, over the rights of the estimated 700,000 transgender Americans.

It would also give California Republicans, facing long odds for major offices such as governor, perhaps their only reason to go to the polls this fall. The state’s Republican Party has endorsed overturning the new law.

“This could get voters who wouldn’t get out for other issues, but will for this,” said Karen England, a longtime conservative activist who is co-chairing the Privacy for All Students campaign to put the measure on the ballot. “And I think this will stop any other state from introducing” similar legislation.

Lies and deceit…we seem to hear one lie after another after another from those who are on Privacy For All Students‘ side. Now it appears that electing conservative Republicans may be a key reason they’re making trans youth the targets in their “Culture War.”

This all reminds me of a scripture from the Bible: Matthew 23:27-28 about religious leaders and teachers of the law.

When it comes to values, the Value Voters in this referendum drive appear to embrace the “values” of lying and deceit. Hey, on principle I’ll take San Francisco Values over the very apparent values of the Privacy For All Students coalition.